Bangladesh vs Pakistan live stream: how to watch Cricket World Cup 2019 from anywhere 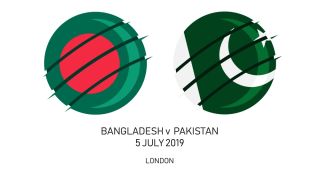 With a win margin of over 300 runs needed to leapfrog New Zealand and take the last remaining  2019 Cricket World Cup semi-final spot, Pakistan’s target today appears almost insurmountable. Follow our Bangladesh vs Pakistan live stream guide and you won’t miss a ball of the action, no matter where you are in the world.

Pakistan’s chances of pulling off mission impossible are remote, but they’ve not done their reputation of being cricket’s most unpredictable team any harm during the tournament – could they pull off another surprise?

The chain of events required for Pakistan to make it through reads like a implausible plot for a Bollywood cricket movie – they need to win the toss, bat first, smash Bangladesh for 400 runs then bowl them out for 84. Simple.

No team has ever tasted victory with a win margin of 316 runs in ODI history, but while its mathematically possible the Men In Green will undoubtedly give it their all.

While Bangladesh’s fight for a place in the last four has come to an end, they’ve given a good account of themselves in the tournament and are unlikely to go out with a whimper.

Can Sarfaraz Ahmed’s men pull off cricket’s greatest ever one-day performance? You’ll be able to watch all the action with ease from anywhere in the world if you follow our Bangladesh vs Pakistan live stream guide below.

If you’re in the UK, Australia, New Zealand, US or India and looking to find out how to watch the match, we’ve got all the details about the broadcaster in your region below.

If you’re away from home country and looking to tune in you’ll likely to find you won’t be able to thanks to geo-blocking. Thankfully there’s a way to alleviate that frustration. By using a VPN you’ll be able to watch the game safely without having to take a chance on an illegal feed from a website that’s likely infested with malware.

We’ve put all the major VPNs through their paces and we rate ExpressVPN as our pick of what’s out there, thanks to it’s ease of use and strong security features. It’s also compatible with just about any streaming device out there, including Amazon Fire TV Stick, Apple TV, Xbox and PlayStation, as well as Android and Apple mobiles. So to get that home broadcast and stay safer online, ExpressVPN is our recommended option. Alternatively go for one of our other top three best VPN services listed below:

1. Express VPN (comes with a 30 day money back guarantee) This is the #1 rated best VPN in the world right now, with those previously mentioned levels of security, speed and compatibility putting it to the top of the list. You can try it out for a month for free or sign up for an annual plan and get 3 months absolutely FREE. Check out Express VPN
2. NordVPN: SmartPlay tech makes NordVPN a great choice for streaming. It’s really affordable, too
3. IPVanish supports up to 10 devices, so great on the go

Once you’ve chosen and installed your VPN  of choice, simply open the service’s corresponding app, hit ‘choose location’, select the appropriate country and you’ll be able to watch the broadcast as if you were back at home. It’s an absolute cinch.

The match is due to start at 2.30pm in Pakistan.

How to stream 2019 Cricket World Cup online in India

Star India/Star Sports are the official broadcaster of the 2019 Cricket World Cup in India and will be showing every game live.

If you don’t want to be tied to a Star Sports subcription, then you can sign up for over-the-top Hotstar streaming service costing either ₹299 (around $3) for a month or ₹999 ($14) for an entire year.

Play between Bangladesh vs Pakistan is due to begin at 3.00pm New Delhi time.

If you’re using any of the two options mentioned above and you’re outside of India, then make use of our VPN guide above to watch the match as if you were at home.

How to stream Bangladesh vs Pakistan live in the UK

Sky Sports holds the sole rights for live broadcasts of all the 2019 Cricket World Cup matches in the UK, meaning you’ll need to be a subscriber in order to watch play from the game and the rest of the action from this year’s tournament. And then there’s the Sky Go app if you’re hoping to watch on a mobile device.

If you want to watch this summer’s cricket carnival but don’t fancy committing to a satellite subscription, then Sky’s Now TV service is a great alternative.

Not in the UK for this game? If you’re away from Blighty you can still watch Sky or Now TV’s coverage by grabbing yourself a VPN and streaming as if you were sat back at home.

How to live stream Bangladesh vs Pakistan in Australia

The main go-to option for fans looking to watch the match and the rest of the World Cup is via a Fox Sports subscription.

If you don’t fancy weighing yourself down with that sort of commitment, then a Kayo Sports Basic Package for $25 per month (for two devices simultaneously) or a Kayo Sports Premium Package for $35 per month (three devices) may suit you better. Both packages will allow you to watch all of the World Cup, but without the need to be tied into a long contract.

You’ll of course need a VPN if you’re intending to watch the Australian coverage from overseas.

How to live stream Bangladesh vs Pakistan in New Zealand

Sky has snapped up exclusive rights to show the Cricket World Cup in New Zealand.

Play is set to begin at 9.30pm – we’d advise having a steady stream of coffee at hand if you’re intending to watch the whole of the proceedings.

If you’re away from your TV, then you can download and watch on the Sky Go app. And if you’re overseas then the VPN method as mentioned above is the best way to go.

How to watch Bangladesh vs Pakistan: US live stream

For red ball fans in America, Willow TV is the official US broadcaster of the tournament. The service costs $9.99 a month and is also available on streaming services such as Sling and Fubo.

To watch Willow TV when you’re out of America and geo-blocked, our VPN workaround as outlined above will ensure you don’t miss any of the action.