Bernie Sanders gets credit for putting the issue of single-payer health care on the table. It was his focus on the topic during the 2016 primary that prompted a lot of people to start talking about the possibility.

But in what can only be assumed was a public relations effort, instead of calling his proposal single payer, he named it “Medicare for All.” That is probably because Medicare enjoys overwhelming support from the American public. There are, however, major differences between single payer and Medicare. While both are government programs, any Medicare recipient will tell you that it involves premiums, copays, and deductibles. The latter two can be offset with additional premiums paid for private insurance.

When Sanders talks about Medicare for All, he isn’t talking about replicating the current program. Instead, he is talking about a government program that eliminates private insurance, as well as copays and deductibles. In other words, a truly single-payer system.

Liz Hamel, the director of public opinion and survey research for the Kaiser Foundation, pointed out how their recent polling demonstrates that this conflation of Medicare and single payer has confused people.

She said, for example, that many respondents assumed Medicare for All meant simply allowing people to enroll in the existing Medicare program, which has substantial out-of-pocket costs.

Here are the results of Kaiser’s recent poll, which demonstrate the confusion. 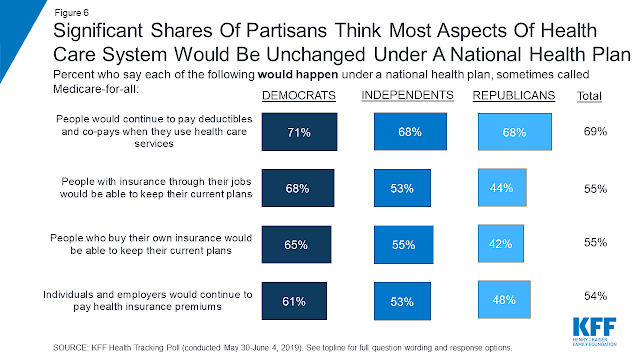 The striking number is that 68 percent of Democrats think that, under Sanders’ Medicare for All proposal, people with employer-sponsored insurance would be able to keep their current plans. Keep in mind that the number of people who get healthcare through their work is approximately 160 million.

The reason that is important is because in a previous Kaiser poll, 56 percent of those polled said that they would support a Medicare for All system. But when asked how they would respond if it meant the elimination of private insurance, support dropped to 37 percent.

That is why Sanders stands alone among the Democratic presidential candidates in proposing an immediate transition to single payer. The rest of the field has embraced incremental steps, such as allowing people to buy in to Medicare, which is what most people think Medicare for All would accomplish.

The first Democratic debates will take place next week and the recent Kaiser poll found that nearly nine out of ten Democrats want the candidates to address the issue of health care. Perhaps the number one job for Bernie Sanders would be to clear up the confusion he has created around the difference between single payer and Medicare.

All rights and copyright belong to the author:
Source – https://washingtonmonthly.com/2019/06/19/bernie-sanders-created-confusion-about-single-payer-health-care/