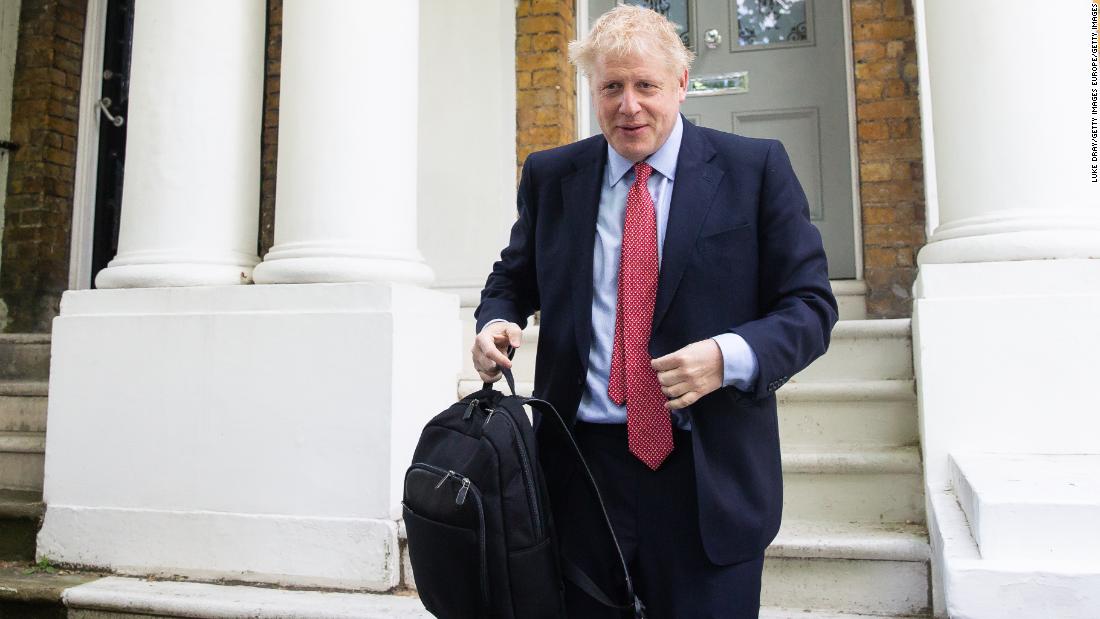 London (CNN)Boris Johnson, the front-runner in the race to become Britain’s next PM, was facing new questions about his suitability for the role Saturday after reports that police were called to an alleged altercation at the apartment he shares with his girlfriend.

Backers of Johnson shrugged off media reports that neighbors heard “a loud altercation involving screaming, shouting and banging” at the couple’s south London home.
The opposition Labour Party’s Brexit spokesman Keir Starmer tweeted the Guardian’s initial story about the alleged dispute with the comment, “Was there ever a man less suited to be Prime Minister?”

Boris Johnson himself has not commented on the report, and his office was not answering calls on Saturday. His campaign did not immediately answer an email from CNN.

The Guardian reported late Friday that a neighbor of Johnson’s girlfriend Carrie Symonds had heard an argument from her apartment, knocked on the door, got no response, and called the police.

The Metropolitan Police issued a statement confirming that a “caller was concerned for the welfare of a female neighbour.”

The police arrived and “spoke to all occupants of the address, who were all safe and well,” adding: “There were no offences or concerns apparent to the officers and there was no cause for police action.”

But they did not name Johnson or Symonds as being involved in the incident.

Symonds has not made a public comment about the incident, which is reported to have happened in the early hours on Friday.

At least six major British newspapers splashed the story across their front pages on Saturday, all naming Johnson and Symonds, and all citing the Guardian as the original source of the story.

More than half a dozen current or former Conservative Party lawmakers contacted by CNN on Saturday declined to reply or said they had no comment.

Alan Duncan, who worked at the Foreign Office when Johnson was Foreign Secretary, dismissed CNN’s question about whether the story would affect Johnson’s leadership bid.

“This is a naïve question. The campaign will handle it,” he told CNN by phone Saturday.

Security Minister Ben Wallace, who nominated Johnson to be Conservative Party leader, was dismissive of the Guardian newspaper report in a tweet.

“What a non story ‘couple have row.’ Lefty neighbours give recording to Guardian. Newspaper reaches new low is a better news story,” Wallace tweeted at Sun journalist Tom Newton-Dunn. Wallace deleted the tweet eight minutes after posting it, but it was archived by the Twitter feed Tweets MPs Delete.

Johnson is due to appear in front of Conservative Party members with his rival for the party leadership, Jeremy Hunt, in Birmingham, later on Saturday.

Johnson is the favorite to win the leadership race, pitching himself as the only man to take the UK out of the European Union on October 31. Hunt has said he would also support a no deal exit.

All rights and copyright belong to the author:
Source – https://edition.cnn.com/2019/06/22/uk/boris-johnson-home-altercation-gbr-intl/index.html?utm_source=feedburner&utm_medium=feed&utm_campaign=Feed%3A+rss%2Fcnn_latest+%28RSS%3A+CNN+-+Most+Recent%29