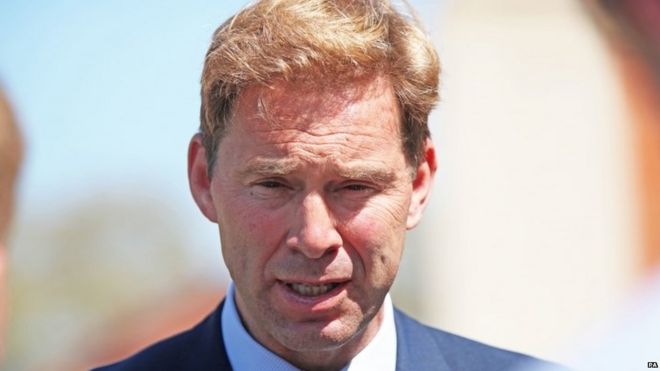 “A dozen or so” Conservative MPs could support a vote of no confidence to stop a no-deal Brexit, defence minister Tobias Ellwood has told the BBC.

He told Panorama that many backbenchers and ministers would rebel if the UK faced leaving the EU on the 31 October deadline without a legal agreement.

Boris Johnson, the favourite to succeed Theresa May as Tory leader, says the UK must leave by that date, come what may.

If the government lost a confidence vote, it could trigger an election.

A vote of no confidence lets MPs decide whether they want a government to continue.

A 14-day countdown is started if a majority of MPs vote for the motion – and a general election will be called if, during that period, the government or any other alternative government cannot win a new vote of confidence.

The current government has a working Commons majority – its effective numerical advantage over all the other parties – of just four and depends on the backing of the Democratic Unionists.

This makes it highly vulnerable to defeat if a small number of its MPs side with Labour and other opposition parties.

Theresa May survived a no confidence vote in January after MPs rejected her Withdrawal Agreement with the EU for the first time. At the time, no Tory MPs backed the move.

But MPs have suggested this could change if the next prime minister – whether it is Boris Johnson or his rival Jeremy Hunt – tries to take the UK out of the EU on 31 October without a legally-binding agreement.

A no-deal exit would see the UK leave the customs union and single market overnight and start trading with the EU on World Trade Organisation rules.

Opponents say it would cause huge disruption at the borders and be catastrophic to many firms reliant on trade with the continent.

But it remains the default legal outcome unless the EU grants the UK another extension to the Brexit process.

Asked if Conservatives opposed to a no-deal Brexit had the “numbers”, Mr Ellwood told Panorama: “I believe that absolutely is the case.

“I think a dozen or so members of Parliament would be on our side, would be voting against supporting a no deal, and that would include ministers as well as backbenchers.”

Brexit was supposed to happen on 29 March but the UK was given an extra seven months to try and get Parliament’s approval for the terms of withdrawal, rejected three times by MPs.

But Mr Hunt challenged his rival to reveal whether he would call an election, something he himself has ruled out, if MPs refused to allow the UK to leave without a deal on that date.

He said said he feared a government led by Mr Johnson would rapidly collapse, because he would be unable to hold together a coalition of supporters that range from MPs who back no deal to others who feel it would be totally unacceptable.

“If you are not clear about exactly what you are going to do, that coalition will collapse immediately and you will have Jeremy Corbyn in Number 10,” the foreign secretary said.

All rights and copyright belong to the author:
Source – https://www.bbc.com/news/uk-politics-48742881