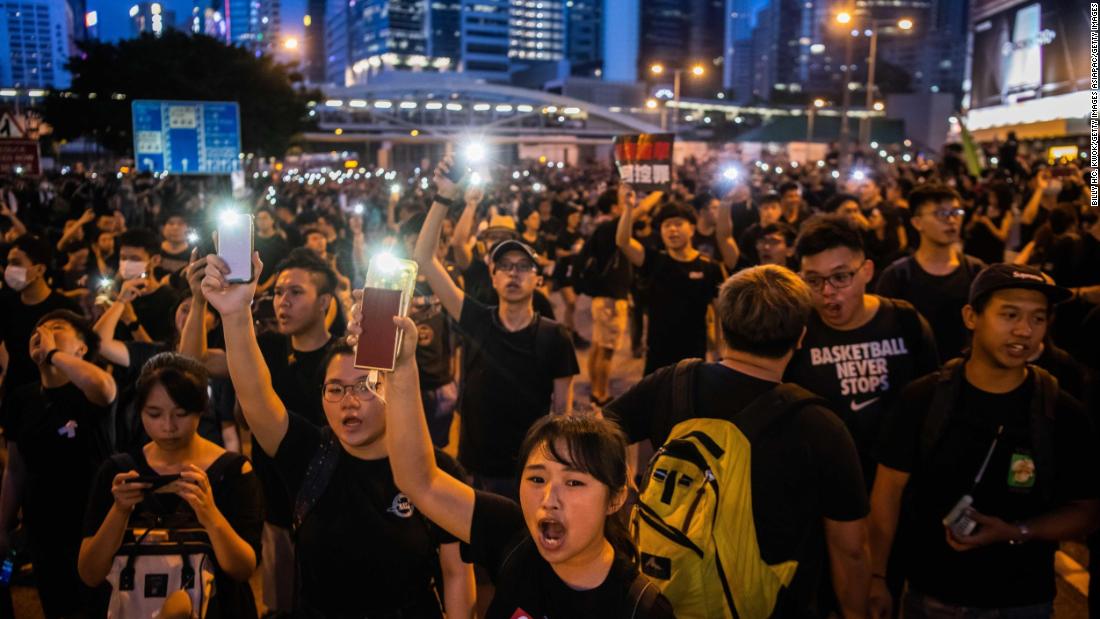 An estimated two million people hit the streets of Hong Kong on Sunday to protest against the government and an extradition bill which critics allege could see the city’s residents sent to face trial in China’s opaque criminal justice system.
It was the third mass demonstration in the semi-autonomous Chinese city in just over a week. In response to the public unrest, the extradition bill has been suspended indefinitely and Hong Kong Chief Executive Carrie Lam has issued an apology.

Speaking at a press conference Wednesday, Wang said Beijing supported the Hong Kong government’s decision to suspend the bill, but added that China had to be “on guard.”

“Some Western forces are using this issue … They have made trouble in Hong Kong, stirred up opposition and tried to sabotage Hong Kong’s stability and damage the implementation of one country, two systems,” he said.

“We want to say this loudly: Pull back the black hand you have shown. Hong Kong is China’s domestic affair. You shouldn’t interfere in Hong Kong. Hong Kong isn’t a place for you to run amok.”

“Mr. Wang’s suggestion that we are somehow under the control of the West… reflects what Beijing’s rule is fundamentally about: Deception, ungrounded accusations against dissidents, and ultra nationalism as a means of control,” said Wong.

“It is no wonder why Hong Kongers are determined to stand up against extradition to China.”

Hong Kong rejoined China after more than a century under British occupation in 1997, but is governed under a separate set of laws which allow greater social and economic freedoms.

This system of government is referred to in general as “one country, two systems.” But in recent years, Hong Kong activists and pro-democracy lawmakers have objected to moves by the city’s government they claim will lead to the erosion of the city’s freedoms.

Millions of Hong Kong protesters have demonstrated in the city since June 9, calling for the extradition bill to be withdrawn and for Chief Executive Lam to step down.

The Chinese government has previously accused the United States and other foreign actors, without evidence, of being behind the protests. Foreign Ministry spokesman Geng Shuang said Friday that people in the US were trying to instigate chaos in Hong Kong.

“We urge certain people in the US to respect basic facts, discard arrogance and prejudice, stop playing dirty tricks that meddle in Hong Kong affairs,” he said.

All rights and copyright belong to the author:
Source – https://edition.cnn.com/2019/06/20/asia/china-wang-yi-hong-kong-intl-hnk/index.html?utm_source=feedburner&utm_medium=feed&utm_campaign=Feed%3A+rss%2Fcnn_latest+%28RSS%3A+CNN+-+Most+Recent%29