Dozens of farmworkers in California vineyard exposed to pesticide 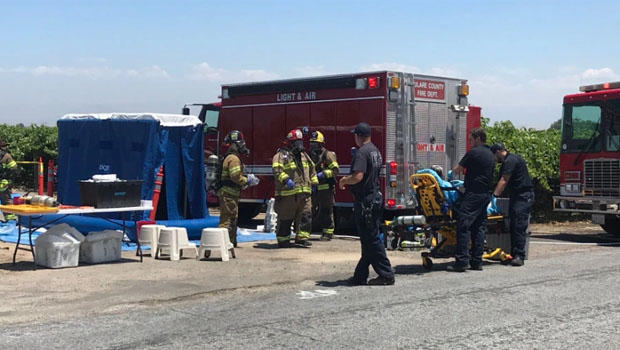 Tulare County, Calif. — Sixty-three farmworkers were exposed to a pesticide on Tuesday, and three were taken to a hospital, CBS Fresno affiliate KGPE reports.

The Tulare County Fire Department said the call came in around 11:45 a.m.

The farmworkers were on the job in a nearby vineyard when the wind shifted and the pesticide drifted from a field that was being sprayed.

The chemical they were hit with is called hexythiazox. The website Beyond Pesticides.org says the chemical kills egg mites and is used on a wide variety of fruits, including grapes.

The three workers brought to the hospital complained of nausea and vomiting.

The other workers were decontaminated on the scene and had no symptoms.

All rights and copyright belong to the author:
Source – https://www.cbsnews.com/news/california-farmworkers-dozens-vineyard-exposed-pesticide-hexythiazox-3-brought-to-hospital/