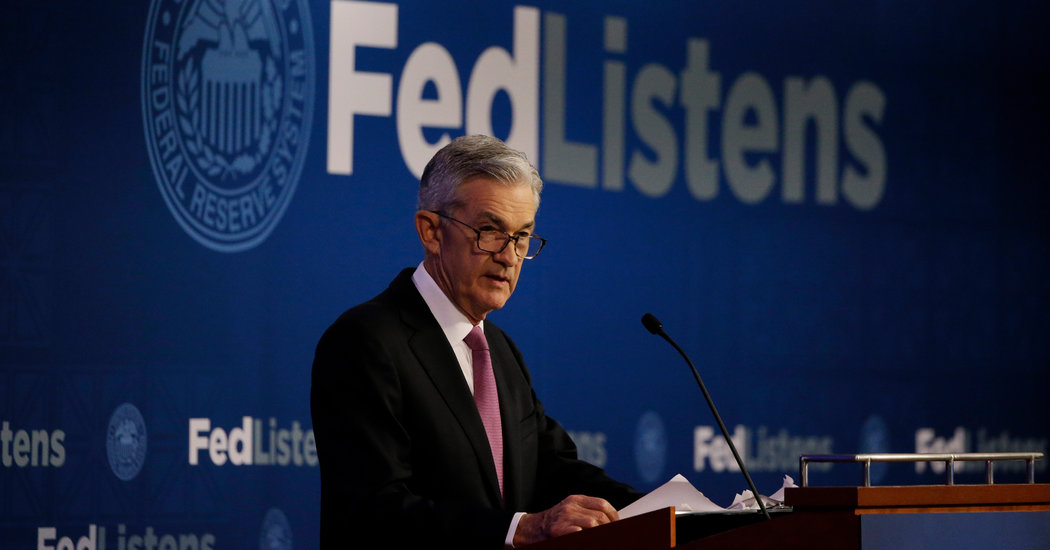 Overall growth and consumer spending remain strong a decade into the economic expansion, but job gains are slowing, the factory sector is weakening and inflation is stubbornly below the central bank’s 2 percent goal. Officials aim for low and steady price gains, in part because they guard against economy-harming deflation.

President Trump’s trade spat with China has also escalated since the central bank’s early May meeting, magnifying the risk of a slowdown. Mr. Trump increased tariffs on $200 billion worth of Chinese goods only days after the Fed’s last gathering, and has threatened to tax an additional $300 billion worth of imports if he and President Xi Jinping cannot reach a deal. Mr. Trump said on Tuesday that the two leaders were set to talk at a Group of 20 meeting this month, at which point the trade outlook could either worsen or de-escalate.

Mr. Trump has not relented in his steady critique of the Fed, blasting it for keeping rates too high to his 61 million Twitter followers. Fed officials — who are independent of the White House — will overlook those comments, but his focus on the Fed will nevertheless pump up the visibility of their decision. The president intensified his line of attack on Tuesday, suggesting that he has prepared to try to demote the Fed chairman, Jerome H. Powell, if he does not move toward easing rates.

“They’re going to be making an announcement pretty soon, so we’ll see what happens,” Mr. Trump said, when asked by a reporter whether he would take the unprecedented step of trying to strip Mr. Powell of his chairmanship. “I want to be given a level playing field, and so far I haven’t been.”

Against that charged backdrop, most Fed watchers expect Mr. Powell and his colleagues to leave rates unchanged for now but signal that they are open to cutting them should the economic outlook worsen.

That could buy the Fed time to see how the China trade war plays out. Several economists said they expect a clear signal that a cut is coming soon, and a few think it is possible that officials will act as early as this week. Moving quickly could help the Fed prove that it is committed to its inflation target, and to stave off an economic slowdown before one becomes a reality.

“You take all of these factors together, and it starts to look like some recalibration of policy to get ahead of these risks seems warranted at this point,” said Julia Coronado, the founder of MacroPolicy Perspectives. She expects the Fed to leave rates unchanged in June while signaling preparedness for a cut in July, but also sees a chance of a move at this meeting. “It would make the message very clear,” she said.

The Fed will release its statement and a quarterly set of economic projections at 2 p.m., followed by a news conference with Mr. Powell at 2:30. A rate cut at this meeting is a little more than 20 percent priced into markets, based on data from the CME Group, and a move at the central bank’s July 31 meeting is at 85 percent.

The mere signal that a rate move is imminent would be a major shift in stance over the past six months. The Fed has not lowered rates since the end of 2008, when the Federal Open Market Committee cut them to zero in an effort to stoke growth in the depths of the Great Recession. From late 2015 to the end of last year, officials gradually raised their policy interest rate to help keep the strong economy from overheating.

Mr. Powell indicated early this year that the Fed was shifting away from steadily lifting interest rates, adopting a patient stance instead as markets wobbled and growth showed signs of weakening. The federal funds rate is now at 2.25 to 2.5 percent, much lower than it has historically been in the later years of an economic expansion.

Mr. Trump regularly argues that Mr. Powell, whom he chose to lead the Fed, made a mistake and lifted rates too many times last year. The president said last week that the central bank’s actions have put the United States at a disadvantage to China in the administration’s continuing trade spat, and on Tuesday tweeted that the European Central Bank’s turn toward added stimulus was “making it unfairly easier for them to compete against the USA” by weakening the euro against the dollar.

Political pressure creates a risk for the Fed, which operates independent of the White House. By lowering rates, officials could appear to be bending to Mr. Trump’s will, even if they are making the move for legitimate economic reasons. But that would be unlikely to deter the Fed from cutting rates if officials believed a move was warranted. Fed policymakers regularly say that they are focused on economic data and will make their decisions independent of the political atmosphere.

A decision to lower rates soon would not necessarily be the start of a full-blown cutting cycle, the kind that happens when the economy is entering a recession and the Fed tries to dig it out.

While there are many risks on the horizon, most real economic data still looks decent: the unemployment rate is at its lowest in nearly 50 years, and the economy is on track to have expanded at an above 2 percent pace in the second quarter, based on incoming data. Activity is slowing down, but the Fed always expected some moderation as fiscal policy stimulus from tax cuts faded.

Instead, these could be “insurance” rate cuts: moves taken pre-emptively to juice the economy just a little bit. The central bank took similar actions when risks threatened economic growth twice in the 1990s.

While many Wall Street economists expect such moves before the end of the year, some are not convinced a series of cuts is imminent.

“We think the hurdle for such cuts is likely to be higher than widely believed,” Jan Hatzius, the chief economist at Goldman Sachs, wrote in a note to clients. The Fed was able to resume rate hikes in the earlier episodes, but that might be harder now given pressure from the White House. “Overly hasty insurance cuts now might increase the risk that the funds rate gets stuck at too low a level if the economy remains resilient.”

There are risks to pushing rates too low at this point in the business cycle. The stock market reacts to hints of coming rate cuts with ebullience, and bond investors may react by seeking out ever-riskier investments that pay higher rates. Because the past three business cycles have died at the hands of bursting financial bubbles, such behavior worries Fed officials.

On the other hand, moving too slowly would come at a cost. Job market slowing usually comes when an economic cool-down is underway, so waiting to see proof of more pronounced weakness in hiring could mean waiting too long.

Tepid inflation is another concern. Prices climbed just 1.5 percent in the year through April, data from the Commerce Department shows, well below the Fed’s 2 percent goal. While officials expect that shortfall to fade with time, they have not hit their inflation target consistently since they formally adopted it in 2012, and inflation expectations are now sinking lower.

Consumer expectations for prices five to 10 years from now have dropped to record-low levels, based on preliminary June survey data from the University of Michigan. Weak expectations can create a self-fulfilling prophecy, weighing down real-world increases and preventing officials from achieving their targets.

But the difference between moving in June and July is a small one, economists and analysts say. Given the huge amount of data coming between the end of this week and the midsummer meeting, from news on trade to new jobs and inflation figures, they said it probably makes sense for the Fed to stay patient a little longer.

“The Fed will open the door to a rate cut, but it won’t quite walk through it,’’ said Gennadiy Goldberg, an interest rates strategist at TD Securities. “Given the recent data and lack of certainty on China, it does behoove them to wait for new information.”

All rights and copyright belong to the author:
Source – https://www.nytimes.com/2019/06/19/business/fed-interest-rates.html?emc=rss&partner=rss

On Saturday, June 12 at the Virgin Hotel in Las Vegas, USA Shakur Stevenson will meet Jeremiah  Nakathila for interim WBO title in a 12-round super featherweight bout at 10 p.m. ET/3 a.m. BST. The 23-year-old Stevenson is a former WBO featherweight titlist who is moving up

UFC 263: Adesanya vs. Vettori 2 Fight by the Ultimate Fighting Championship that will take place on June 12, 2021 at the Gila River Arena in Glendale, Arizona, United States. The live feed is expected to stream at 2:30 p.m. ET. In the US it'll be live on

Brazil has announced a 24-member squad for the Copa America at home. Brazil coach Tito has made just one change to his squad for the last two World Cup qualifiers. Chelsea defender Thiago Silva has returned to the side. Neymar, Roberto Firmino, Vinicius Jr., Gabriel Jesus, Everton, Gabriel Roboso and