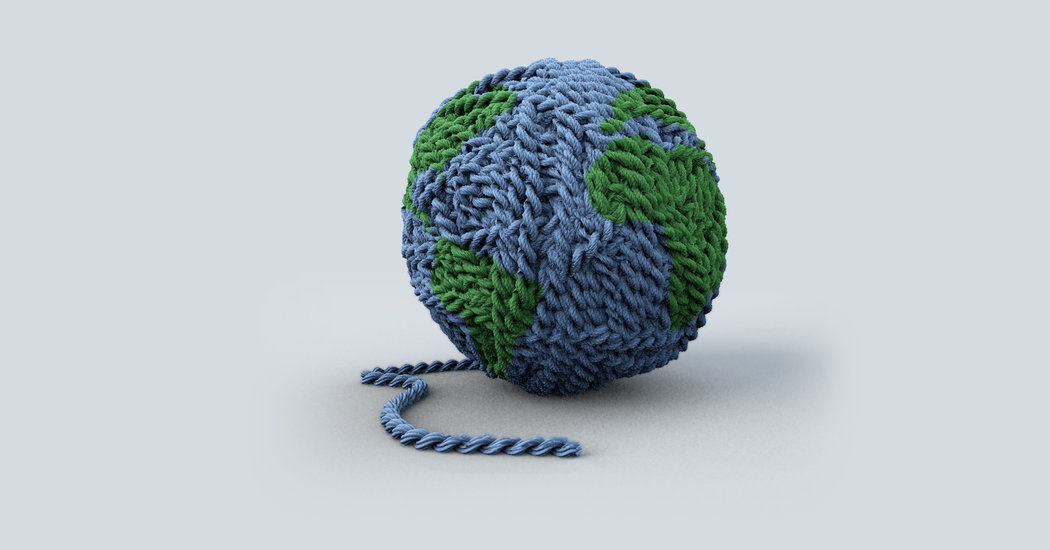 LONDON — If globalization were ever going to unravel, the beginning would probably feel something like this.

President Trump, the leader of the country that built the world trading system, continues to disrupt international commerce as a weapon wielded in pursuit of national aims. He has unleashed trade hostilities with China, placed tariffs on steel made by allies like Europe and Japan, and restricted India’s access to the American market. He vowed to hit Mexico with tariffs mere months after he agreed to a new version of a deal liberalizing trade across North America.

But globalization has become such an elemental feature of life that it is probably irreversible. The process of making modern goods, from airplanes to medical devices, has become so mind-bendingly complex, involving components drawn from multiple continents, that a few unexpected tariffs will not prompt companies to swiftly close factories in China and Mexico and replace them with plants in Ohio and Indiana.

What does appear to be ending is the post-World War II era in which the United States championed global trade as immunization against future conflict, selling the idea that the free exchange of goods was a pathway toward a more stable world order.

“One thing is really clear: There has got to be a reset in the world trading system,” said Swati Dhingra, an economist at the London School of Economics. “It’s all breaking at the seams at this point.”

The trade war unleashed by Mr. Trump has injected higher costs and confusion into the global economy, forcing businesses to anticipate the next venue for hostilities. American retailers and manufacturers voiced that complaint on Monday in testimony to the Office of the United States Trade Representative, ahead of Mr. Trump’s plans to put tariffs on a further $300 billion worth of Chinese imports.

“This is now the post-American world economy, one in which globalization is much more spotty,” said Adam S. Posen, president of the Peterson Institute for International Economics in Washington. “The world is a riskier place, where access to markets is a lot less sure.”

In the Trump framing, the United States is best served by the unsentimental exploitation of its position as the world’s largest economy. It must brandish threats of limiting access to its market to force other countries to capitulate to its demands.

But the rest of the planet is increasingly refusing to play along, instead seeking alternatives to trade with a suddenly mercurial United States. This year, Europe and Japan set in motion a mammoth trade deal that generates fresh opportunities for their companies, while leaving American players at a disadvantage.

Under the Trans-Pacific Partnership, a separate trade deal forged by 11 countries, Japan agreed to open its heavily protected market to agricultural imports, handing American farmers a lucrative opportunity. Days into his presidency, Mr. Trump closed that window by renouncing American participation in the deal. Now, European farmers have secured their own broadened access to the Japanese market.

China has responded to Mr. Trump’s tariffs with levies on American goods, including soybeans, wood products, and machinery. At the same time, China has lowered tariffs on imports from countries like Germany and Canada, lifting the fortunes of American competitors in those nations, according to an analysis by Chad P. Bown at the Peterson Institute.

For example, China doubled duties on American agricultural and fish products to an average of 42 percent from 21 percent, Mr. Bown found. At the same time, China lowered average tariffs on the same wares from the rest of the world to 19 percent.

Mr. Trump has sold his trade war as a means of returning jobs to a forsaken American heartland. In his version, naïve presidents allowed other nations, especially China, to steal factory jobs from the United States. His tariffs will pressure multinational companies to bring those jobs back.

But if that story makes for rewarding politics, it rests on antiquated economic assumptions about the global marketplace.

Mr. Trump’s trade war will probably not increase the number of American jobs, although it has imperiled paychecks at auto plants and other factories that rely on imported components. What it will bring is higher prices for manufactured goods, economists say, along with uncertainty over the terms of trade. It is sapping vitality from an already weakening world economy.

Entire supply chains — expansive linkages of parts for factory goods — have formed across Asia, Latin America and Europe. The United States could recreate those supply chains at home, but at a far higher cost. In the meantime, American industries would be severely constrained.

The largest manufacturers use China as a base to sell products to the world, limiting their exposure to American levies. Caterpillar, the agricultural and construction equipment company, operates factories in China, but sells many of its finished products within Asia.

A poll last month by the American Chamber of Commerce in China found that 40 percent of its member companies had moved factory operations out of China or were considering doing so. Among those leaving, fewer than 6 percent were going to the United States, while more than a third were focused on Southeast Asia or Mexico.

Companies that do resume making goods in American factories are likely to buy robots and other machinery, rather than hiring large numbers of Americans.

The calculus of technology and geography — never simple — has been rendered more complicated by Mr. Trump’s trade war. Canary, an oil field services company based in Denver, has been seeking to shift purchases of equipment from Chinese to Mexican suppliers to avoid American tariffs, its chief executive recently asserted.

Yet in refusing to rule out across-the-board tariffs on Mexican goods, Mr. Trump left the corporate world guessing about the commercial map. Where can a company invest without worrying about a fresh outbreak of trade hostilities? That question hangs over the world economy even after the president relented on threats to impose tariffs on Mexican goods.

“It’s not so much you don’t know where to go,” Mr. Posen said. “There is no place to go. In a world in which there is arbitrary use of commercial regulation by the United States, no cross-border investment looks to be as safe and useful as it used to.”

Companies are mostly hesitating, limiting orders and holding off on investments in the hope that time will bring clarity. A similar worry now discourages commerce in Britain, as it remains stuck in its Brexit quagmire. With no inkling on the rules that will govern future dealings between Britain and the rest of the European Union, investment is slowing.

But Brexit is a regional affair. Mr. Trump’s trade war is downgrading expectations for growth worldwide.

Globalization did not happen by government design, and it will not be dismantled by political predilections. Businesses will continue to tap world markets and trade across borders — a wealth-enhancing formula, even as many major economies have failed to equitably distribute the bounty, leaving communities vulnerable to job losses.

The escalating trade war has dealt a potentially grievous blow to the workings of the global commercial system, and especially to its de facto referee, the World Trade Organization.

Many of Mr. Trump’s tariffs have come with the credibility-straining legal justification that they are required for national security. Trade experts have derided his approach as an existential assault on the concept of a rules-based trading system.

The dispute with Mexico elevates the fear. The Trump administration cited a domestic law created to enable presidents to cut off finance to rogue regimes, deploying a remedy for unfair trade — tariffs — as a cudgel in an unrelated dispute over immigration policy.

“This set of tariffs against Mexico is completely outside the W.T.O.,” said Meredith Crowley, an international trade expert at the University of Cambridge in England. “It’s just a big punch in the nose to the W.T.O.”

Among the institution’s members, the sense is deepening that its rules need updating. The organization was not built to address the disruptive force of China, a colossal economy that has subsidized key industries while pursuing a vast collection of global infrastructure projects known as the Belt and Road Initiative.

Beijing has lavished credit around the world in exchange for promises that recipient governments use the cash to hire Chinese construction companies, willingly doing business with authoritarian regimes from Egypt to Iran.

In conducting his trade war outside the W.T.O. framework, Mr. Trump has ironically bolstered China’s mode of operation — one in which bottom-line concerns take precedence over labor and environmental standards, while national interests eclipse general principles.

“This is openly violating the rules of game,” said Ms. Dhingra, the economist.

All rights and copyright belong to the author:
Source – https://www.nytimes.com/2019/06/19/business/globalization-us-world-order.html?emc=rss&partner=rss