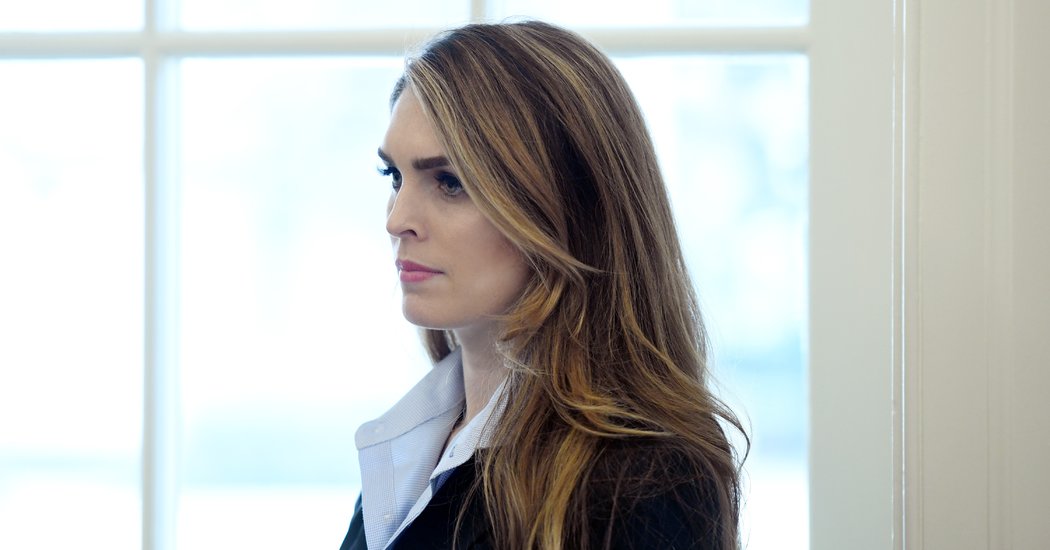 WASHINGTON — After weeks of simmering frustration, House Democrats will take their first shot on Wednesday at questioning a key figure from Robert S. Mueller III’s investigation into whether President Trump obstructed justice. But meaningful testimony may prove elusive.

Lawmakers on the House Judiciary Committee plan to press Hope Hicks, one of Mr. Trump’s closest former aides, on her recollections of episodes documented by Mr. Mueller, the special counsel, in which Mr. Trump tried to assert control over investigations of his campaign’s ties to Russian election interference. They will also resurrect an older accusation against Mr. Trump: the president’s role in an illegal scheme to make hush payments to a pornographic film actress during his 2016 campaign.

Democrats are also expected to cover those topics at a public hearing on Thursday before the Judiciary Committee. They have called legal experts from both parties to discuss the implications of the hush payments and Mr. Trump’s boast last week to ABC that “I’d take it” if Russia again offered his campaign assistance in 2020.

But if the burst of activity has the potential to kick-start Democrats’ stalled investigations into Mr. Trump, it is also likely to highlight the limitations they face as the White House, key witnesses and even Mr. Mueller resist cooperation.

Though she has agreed to answer questions, Ms. Hicks will only do so behind closed doors with a transcript to be released later. And late Tuesday, the White House counsel, Pat Cipollone, said in a letter that Mr. Trump had instructed Ms. Hicks to avoid answering questions about her work in the White House or on the presidential transition. The president’s advisers are immune from sharing such details “in order to protect the prerogatives of the office of president,” Mr. Cipollone wrote, adding that a White House lawyer was expected to attend her questioning to press Mr. Trump’s view.

Democrats were displeased, if not altogether surprised.

“It’s frustrating,” said Representative David Cicilline, Democrat of Rhode Island and a member of the Judiciary Committee. “The president is engaging in an ongoing cover-up to prevent us from getting to the truth and continues to behave like he is not bound by the law of this country. This is going to be an ongoing battle.”

Some Democrats on the committee have begun arguing that they should reach down the witness list to Trump associates who may figure less prominently in Mr. Mueller’s report but whom the White House cannot shield from testifying because they never worked in the administration.

One such possibility is Corey Lewandowski, Mr. Trump’s former campaign manager whom the president ordered in June 2017 to deliver a message to the attorney general at the time, Jeff Sessions, to reassert control over the special counsel investigation and drastically limit its scope, according to the Mueller report. Another is Christopher Ruddy, a friend of Mr. Trump’s, who recounted to the special counsel about being told during a White House meeting the same month that Mr. Trump was thinking hard about firing Mr. Mueller.

But both men, and others like the former governor of New Jersey, Chris Christie, are also political allies of the president and savvy messengers capable with the help of House Republicans of upending a hearing to undermine Democrats.

Under an agreement forged last week with the Justice Department, Judiciary Committee members have begun to get access to F.B.I. summaries of witness interviews and notes and other communications that Mr. Mueller collected. The documents could influence where the committee goes next.

Democrats are more likely to try call Jody Hunt, Mr. Sessions’s former chief of staff who kept detailed notes of White House and Justice Department meetings; and Rick Dearborn, a White House aide whom Mr. Lewandowski enlisted to help him deliver Mr. Trump’s message to Mr. Sessions. But both men could try to claim that Mr. Trump’s right to assert executive privilege keeps them from disclosing information about those episodes.

Ms. Hicks has already made such an assertion once. When she appeared for private questioning by the House Intelligence Committee in February 2018, she declined to answer questions about her work on the Trump presidential transition or in the White House. Now, she will come armed with a letter from Mr. Cipollone saying that she is “absolutely immune” from being forced to testify.

“The longstanding principle of immunity for senior advisers to the president is firmly rooted in the Constitution’s separation of powers and protects the core functions of the presidency,” he wrote in a letter to the committee’s chairman, Representative Jerrold Nadler of New York.

The White House made the same argument to stop the former White House counsel Donald F. McGahn II, another key Mueller witness, from testifying before the Judiciary Committee.

Democratic aides to the Judiciary Committee told reporters on Tuesday that they were prepared to contest such assertions on the spot. They argued that any claims of executive privilege or immunity over information that Ms. Hicks had already shared with Mr. Mueller and was subsequently released in his redacted 448-page report were unlikely to stand up to scrutiny. Lawmakers also typically argue that communications from presidential transition periods are not subject to presidential protections.

Executive privilege does not apply to conversations and events that took place during Mr. Trump’s campaign, meaning that the most fruitful line of questioning could revolve around the hush payments to the actress, Stormy Daniels. Michael D. Cohen, Mr. Trump’s former personal lawyer who arranged the payments, pleaded guilty to related campaign finance charges and other felonies and has told prosecutors that Mr. Trump was involved in the scheme.

But Democrats also plan to ask Ms. Hicks about a litany of episodes she knew about or witnessed given her proximity to Mr. Trump. They include a 2016 meeting at Trump Tower between campaign officials and a Russian lawyer offering damaging information on Hillary Clinton and the drafting of a misleading statement about the meeting. Mr. Mueller’s report also mentioned Ms. Hicks’s role in discussions of the firing of James B. Comey as F.B.I. director, the appointment of Mr. Mueller as special counsel and later attempts by Mr. Trump to fire the special counsel or curtail his inquiry.

Republicans on the committee have generally supported Mr. Trump, pointing repeatedly to Mr. Mueller’s decision not to charge Mr. Trump or his campaign for either conspiracy with the Russians or obstruction of justice. They did not preview their strategy for the questioning of Ms. Hicks.

All rights and copyright belong to the author:
Source – https://www.nytimes.com/2019/06/19/us/politics/hope-hicks-house-judiciary-testimony.html?emc=rss&partner=rss