How 2020 Democrats are preparing for the first debate 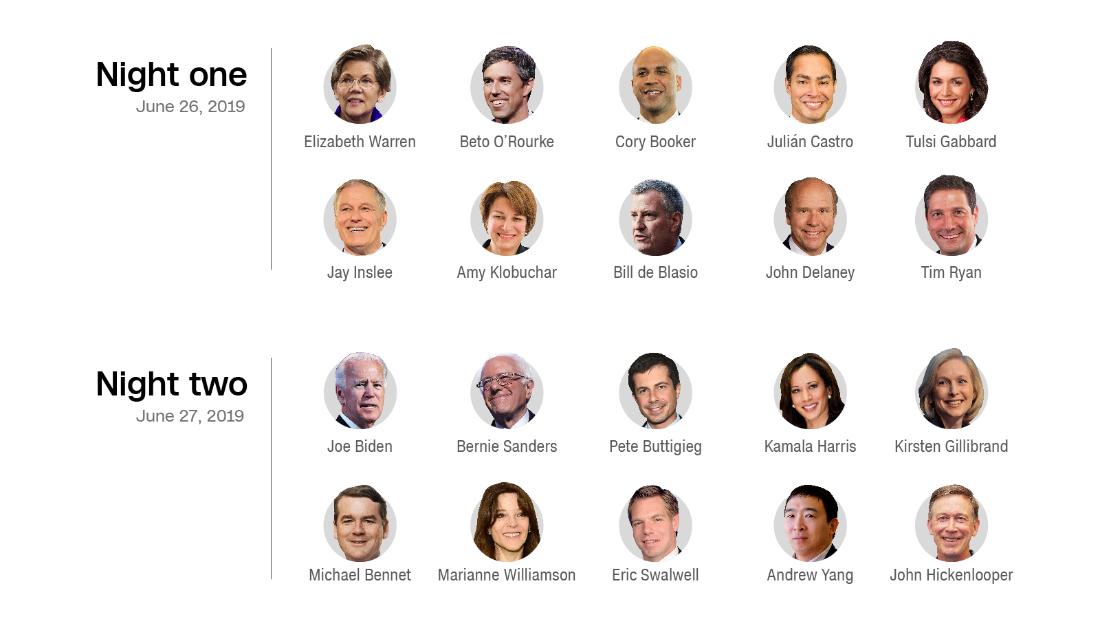 Candidates’ schedules have been lighter than normal of late, with many dedicating weeks to prepare for the debate stage. That preparation has ranged from mock debates featuring aides and advisers playing other competitors to spending more time reading up on policy differences.

While acrimony has been steadily rising inside the Democratic field, many operatives from a range of campaigns said they expect the first debate to be far from contentious.

Advisers to several campaigns said they are advising against directly confronting fellow candidates on stage in Miami. It is expected to be the largest audience yet — a prime opportunity for the contenders to introduce themselves — and they don’t want voters to remember attacks on fellow Democrats.

“If you attack someone, you end up helping the third person, not yourself,” said Jennifer Palmieri, a veteran of presidential campaigns who advised Hillary Clinton in 2016 and John Edwards in 2008, and who is currently supporting Montana Gov. Steve Bullock, who did not qualify for the debate.

Despite being split up by random draw, the first night’s contest — which includes Warren, Klobuchar and New Jersey Sen. Cory Booker — is devoid of any top five candidates other than the Warren. That has made the second night — which includes Biden, Sanders, South Bend Mayor Pete Buttigieg and California Sen. Kamala Harris, all of whom are in the top five in polling — the perceived main stage debate, meaning it could get more attention.

However, most operatives are skeptical that either night will significantly shake up the race.

“At the end of the day, you got 10 people each night in a two-hour block. Until the race sort of narrows down, you’re not really going to have, I think, a lot of substantive back-and-forth between the candidates. Just because there’s not enough time to do it,” said Jeff Weaver, a senior adviser to Sanders who managed his 2016 campaign.

But that doesn’t mean that the candidates haven’t spent weeks preparing, with some candidates devoting considerable time familiarizing themselves with the time constraints — each candidate will be given one-minute talking time and 30 seconds when responding to an attack. Others are preparing for how their body language could be perceived on camera.

For most candidates, that means their summer TV list has included watching old debates.

Biden has the most under his belt, notably his 2008 vice presidential match-up with then-Alaska Gov. Sarah Palin and in 2012 with then-Rep. Paul Ryan of Wisconsin. He had a strong showing in both performances, even surprising some Obama campaign aides at the time.

For his part, Biden has been viewing some of Sanders’ exchanges with Clinton in 2016, aides said, trying to acquaint himself with Sanders’ style. He’s far less familiar with the mannerisms and approach of several others, including Buttigieg, who will be standing to the former vice president’s immediate left.

For weeks, Buttigieg has been making a generational argument about his candidacy — an unspoken knock on Biden, who is twice his age. Biden has been known to deliver one-liners to great effect. One supporter of Biden suggested that he could employ a version of President Ronald Reagan’s 1984 classic comeback to former Vice President Walter Mondale.

“I will not make age an issue of this campaign. I am not going to exploit, for political purposes, my opponent’s youth and inexperience,” Reagan said when asked if he was too old to be president at 73. (Biden is three years older and an aide declined to comment whether he would use such a line.)

Buttigieg told an audience in South Carolina over the weekend that he “can’t wait” to get to the debate, adding that he was practicing for the contest. But Buttigieg said that it was “too complicated” to have aides fill in for each of the candidates he will face.

“It’s going to be great. We can’t wait. Starting to practice, get ready,” Buttigieg said Saturday. “What you’re going to see is we all share pretty common and similar values in the Democratic Party.”

The line nods to something many advisers told CNN: Expect to hear promises to come together after the primary over and over again.

“That’s the biggest applause line — always,” a senior adviser to a leading campaign said. “People want to beat Trump more than watching us beat up on each other.”

Yet for the presidential hopefuls who are struggling to break through the crowded field, launching an attack at a fellow candidate may be the best way of doing so.

Hickenlooper and former Maryland Rep. John Delaney have already been telegraphing their disdain for Medicare for All and other liberal policy ideas, so a confrontation on that front would follow a pattern already underway. Hickenlooper shares a stage with Sanders, while Delaney shares one with Warren.

A Gillibrand adviser said most of what she will say “will be done in a positive way” but that ” any candidate, unless maybe you are in the top one or two or three, who is going in without a plan to distinguish themselves is probably not going in with a very strong strategy.”

“We are studying the issues. We are trying to figure out who is up there on the stage with me and we are going to be contrasting out views with other people,” Sanders told CNN. “I am proud of the record that we have and we will be contrasting it with others.”

Despite acknowledging that he will look to contrast himself with his opponents — the Vermont liberal will be sharing the stage with Biden, Harris and Buttigieg — he said he expects the debate to be “friendly.”

“We are going to be debating the real issues facing the American people,” he added, “and not get into personal controversy and gossip.”

Most candidates believe there are two reasons creating a direct contrast could be tough, though: The Democratic field, to date, has been generally unified on a range of issues and there is a perceived lack of appetite inside the party for candidates to aggressively go after one another.

“I think contrast is fine, especially if you have a difference,” Gillibrand told CNN, “but for most of us there are very few differences.”

Ohio Rep. Tim Ryan was skeptical that there won’t be some jabbing on the debate stage.

“You could say they won’t,” Ryan said about people not attacking one another in the debate, “but it never ends up that way, does it?

He added: “I think people will be trying to do some contrast. But there is also not a lot of room in the Democratic Party right now for people super bashing each other. Because Trump is the main issue.”

One issue that all candidates are confronting is how to handle the time constraints.

Warren has spent time trying to boil down, prioritize and sharpen her myriad policy proposals, aides said, mindful of the time crunch on a stage with 10 other candidates. She’s also been preparing to be asked about her rivals who aren’t on stage — namely Biden and Sanders, who will appear on the second night.

Warren is also poised to defend her ideas, from Medicare for All and her signature wealth tax, from moderate candidates who have drawn boos at liberal gatherings criticizing her plans.

But for most candidates, especially those who have failed to poll above 1% in most polls, the contests on Wednesday and Thursday are the best chance they have had to introduce themselves to the country.

“My priority is to introduce myself to the American people because my name ID is lower than it is for several of the other people,” said former Housing and Urban Development Secretary Julian Castro.

Asked if he had any other goals, Castro laughed and said, “Oh, you know, avoid any mistakes.

All rights and copyright belong to the author:
Source – https://edition.cnn.com/2019/06/25/politics/democratic-debate-candidates-prepare/index.html?utm_source=feedburner&utm_medium=feed&utm_campaign=Feed%3A+rss%2Fcnn_latest+%28RSS%3A+CNN+-+Most+Recent%29

From On-Set Screaming Matches to the Role That Almost Went to Britney Spears: 15 Shocking Secrets About The Notebook