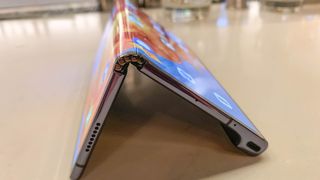 The foldable Huawei Mate X is still coming and we know when it’ll launch: September or sooner, according to a Huawei executive who spoke to TechRadar this week.

Where will the Huawei Mate X launch? “Any country that has 5G,” Pang told us, making sure to remind us that Huawei’s foldable phone is a 5G phone.

This was likely stressed because the Samsung Galaxy Fold launched with a 4G LTE version (before ultimately being recalled), with a 5G version only spoken about once and never officially priced.

Of course, Pang’s “any country that has 5G” comment comes with a caveat. The Mate X isn’t coming to the US, which is no surprise given the Huawei ban in the US.

We got more hands-on time with the Huawei Mate X, going as far as playing a game on all of its screens: folded front, folded back, and unfolded in tablet mode.