In New Talks, U.S. May Settle for a Nuclear Freeze by North Korea 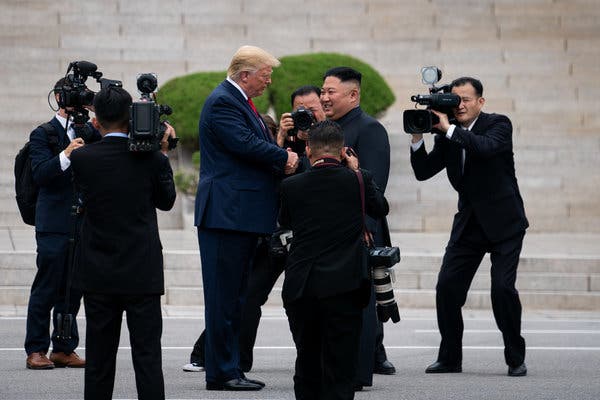 SEOUL, South Korea — From a seemingly fanciful tweet to a historic step into North Korean territory, President Trump’s largely improvised third meeting on Sunday with Kim Jong-un, the North Korean leader, was a masterpiece of drama, the kind of made-for-TV spectacle that Mr. Trump treasures.

But for weeks before the meeting, which started as a Twitter offer by the president for Mr. Kim to drop by at the Demilitarized Zone and “say hello,” a real idea has been taking shape inside the Trump administration that officials hope might create a foundation for a new round of negotiations.

The concept would amount to a nuclear freeze, one that essentially enshrines the status quo, and tacitly accepts the North as a nuclear power, something administration officials have often said they would never stand for.

It falls far short of Mr. Trump’s initial vow 30 months ago to solve the North Korea nuclear problem, but it might provide him with a retort to campaign-season critics who say the North Korean dictator has been playing the American president brilliantly by giving him the visuals he craves while holding back on real concessions.

While the approach could stop that arsenal from growing, it would not, at least in the near future, dismantle any existing weapons, variously estimated at 20 to 60. Nor would it limit the North’s missile capability.

The administration still insists in public and in private that its goals remain full denuclearization. But recognizing that its maximalist demand for the near-term surrender of Mr. Kim’s cherished nuclear program is going nowhere, it is weighing a new approach that would begin with a significant — but limited — first step.

American negotiators would seek to expand on Mr. Kim’s offer in Hanoi in February to give up the country’s main nuclear-fuel production site, at Yongbyon, in return for the most onerous sanctions against the country being lifted. Mr. Trump, under pressure from his secretary of state, Mike Pompeo, and his national security adviser, John R. Bolton, rejected that proposal, because so much of the North’s capability now lies outside the vast Yongbyon complex.

The idea now is to get Mr. Kim’s new negotiating team to agree to expand the definition of the Yongbyon site well beyond its physical boundaries. If successful — and there are many obstacles, including the North accepting intrusive, perhaps invasive inspections — it would effectively amount to a nuclear freeze that keeps North Korea from making new nuclear material.

But a senior United States official involved in North Korean policy said there was no way to know if North Korea would agree to this. In the past, he said, its negotiators have insisted that only Mr. Kim himself could define what dismantling Yongbyon meant.

To make any deal work, the North would have to agree to include many facilities around the country, among them a covert site called Kangson, which is outside Yongbyon and is where American and South Korean intelligence agencies believe the country is still producing uranium fuel.

A president embarking on a re-election campaign — and who complained repeatedly on Sunday that he receives no credit from the media for de-escalating tensions with North Korea and for the freeze on underground nuclear tests and test-launches of intercontinental ballistic missiles — would most likely cast this as a victory, as another restraint on Mr. Kim. It would help Mr. Trump argue that he is making progress, albeit slowly, on one of the world’s most intractable crises.

And it would be progress after three face-to-face meetings — first in Singapore a little more than a year ago, then in Hanoi, then in an hourlong discussion at the DMZ on Sunday — that have produced warm exchanges but no shared definitions of what it meant to denuclearize the Korean Peninsula. A year after that first meeting, the North has yet to turn over an inventory of what it possesses, claiming that would give the United States a map of military targets.

On Sunday evening, the State Department’s envoy to North Korea, Stephen E. Biegun, said that this account of the ideas being generated in the administration was “pure speculation” and that his team was “not preparing any new proposal currently.”

“What is accurate is not new, and what is new is not accurate,” he said.

Presumably, Mr. Trump’s freeze would have to be a permanent one, or he will have gotten less from Mr. Kim than President Barack Obama got from Iran in a deal Mr. Trump dismissed as “disastrous.” And even a successful freeze would constitute a major retreat from the goal of the “rapid denuclearization of North Korea, to be completed by January 2021,” as Mr. Pompeo put it last fall.

But it does have the benefit of being vastly more achievable.

More than two years ago, on his first trip to Seoul, Secretary of State Rex W. Tillerson rejected a similar idea. He said it would “leave North Korea with significant capabilities that would represent a true threat, not just to the region, but to American forces, as well.”

But Mr. Trump, who prizes his personal relationship with Mr. Kim, would most likely argue that a freeze was groundbreaking. (He has also described Mr. Tillerson, who he dismissed early in 2018, as “dumb as a rock” so he would most likely not be limited by his past declarations.)

In fact, this approach has been attempted before: It bears strong similarities to the nuclear freeze President Bill Clinton negotiated with Mr. Kim’s father in 1994. But that was a dozen years before the North’s first nuclear test, and before it possessed either nuclear weapons or the capability to deliver them.

Mr. Clinton’s deal held for five or six years, until it became obvious the North was cheating by seeking a new approach to the bomb — uranium enrichment. The North broke out of it in 2003. George W. Bush negotiated a partial freeze at Yongbyon in 2007; it too fell apart.

The approach raises the larger question of whether Mr. Trump really cares about striking a tough denuclearization deal, or whether, as many critics charge, he is mainly interested in the illusion of progress to present himself to voters as a peacemaker.

Mr. Trump’s more limited expectations may, however, mesh perfectly with Mr. Kim’s plans. While Mr. Kim is eager to shed all the economic sanctions on his country, some North Korea analysts believe he would happily accept only partial sanctions relief along with lowered expectations that he might actually surrender his arsenal.

“I do think Kim could offer just enough on the negotiating table, such as the Yongbyon nuclear facility plus yet another suspected nuclear facility, in order to secure an interim deal with Trump and at least some sanctions relief,” said Sue Mi Terry, who served at the C.I.A. and the National Security Council under Presidents George W. Bush and Barack Obama.

Mr. Kim “may calculate that this is still not a bad deal because it would allow the North to keep its nuclear and missile arsenal — and it would give Trump an opportunity to claim he had achieved something none of his predecessors had,” Ms. Terry said.

At the core of Mr. Trump’s argument is that his friendship with Mr. Kim alone constitutes diplomatic success; on Sunday, the president asserted that the “tremendous danger” from North Korea he inherited when he took office has passed. “We’re a lot safer today,” Mr. Trump said before a meeting with South Korea’s president, Moon Jae-in.

Adam Mount, a senior fellow at the Federation of American Scientists, said, “Several times he spoke as if friendship with Kim Jong-un is an end in itself.”

Mr. Trump may once have warned of “fire and fury” if Mr. Kim failed to surrender his weapons, but he “now embraces that these meetings aren’t about getting to denuclearization but instead having a good one-to-one relationship with Kim Jong-un,” said Van Jackson, a former senior country director for Korea at the Department of Defense during the Obama administration

If so, the outline of the next year or so of negotiations may be taking shape: A series of on-and-off negotiations that creep forward, punctuated by feel-good presidential meetings like Sunday’s, while the world grows use to an arsenal of North Korean weapons the way it grew accustomed to Pakistan’s, or India’s or Israel’s.

“Despite all the reality show-like optics of the Singapore and Hanoi summits and this meeting today, what substantive progress have we made in denuclearization?” asked Yun Duk-min, a former chancellor of the Korea National Diplomatic Academy who now teaches at Hankuk University of Foreign Studies in Seoul. “Not a single nuclear warhead or missile in North Korea has been eliminated. The North’s nuclear facilities are still in operation.”

On Sunday, Mr. Trump was ushered into the Demilitarized Zone by President Moon of South Korea — who then sat outside while Mr. Trump and Mr. Kim met. It was a stunning bit of symbolism for those who argue the South has been sidelined in these talks.

“Through their meeting today, the South and North Korean leaders and the American leader made history,” Yoon Do-han, Mr. Moon’s chief presidential press secretary, said in a statement following the border meeting.