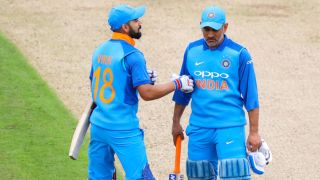 India have been every bit as impressive as we were expecting in the 2019 Cricket World Cup. With Rohit Sharma and Virat Kohli firing on all cylinders and Jasprit Bumrah and Mohammed Shami doing the job with the ball, they’re probably marginal favourites to win the whole thing. Can they demonstrate their dominance with another big win over Sri Lanka today? Find out by watching and India vs Sri Lanka live stream using the guide below.

Aside from their impressive win against England, Sri Lanka will head home after today’s game feeling somewhat disappointed with their performance at the 2019 Cricket World Cup. This final group match against does at least give them an opportunity to go out on a high and prove their worth against India, the tournament’s best performing team thus far.

Despite being comfortably already in the last four, India won’t be taking their foot off the pedal with today’s match providing the opportunity to seal their place at top of the round robin table and book in a semi-final slot against New Zealand rather than hosts England.

Sri Lanka will be hoping to replicate their heroics of when the two teams last played each other on English soil during the ICC Champions Trophy in 2017, when the Tigers somehow managed to chase down India’s 321/6 with seven wickets to spare. Expect a high scoring game – the weather forecast is warm and sunny for majority of the day in Leeds, meaning the pitch should favour those batting.

You’ll be able to watch all the Cricket World Cup action with ease from anywhere in the world if you follow our India vs Sri Lanka live stream guide below.