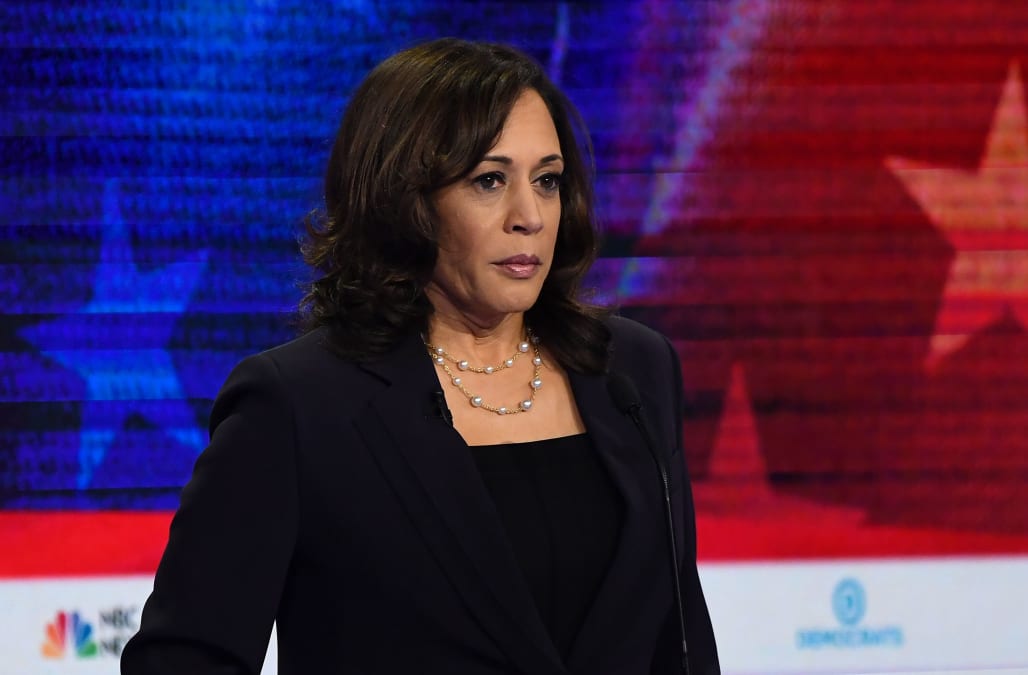 The campaign of Democratic presidential hopeful Kamala Harris has fired back after Donald Trump Jr. and others seemed to question the Senator’s racial background in what some are calling another form of the so-called “birther conspiracy.”

“This stuff is really vile and everyone should speak out against it,” Lily Adams, Harris’ campaign spokeswoman, tweeted Saturday.

Her post was in response to a reference to a Daily Beast story about Harris’ rise among the 2020 candidates and the subsequent attacks against her blackness which the outlet calls “a play straight out of the racist birther playbook used against Barack Obama.”

San Francisco District Attorney Kamala Harris poses for a portrait in San Francisco, Friday, June 18, 2004. The December election of a new district attorney was supposed to signal a turning point for police-prosecutor relations in San Francisco, where lofty, ultra-liberal ideals sometimes clash with the street-level realities of law enforcement. But after ousting her former boss on a pledge to restore order to the DA’s office, Kamala Harris has faced unforeseen trials with her colleagues in blue. (AP Photo/Marcio Jose Sanchez)

California Attorney General Kamala Harris, who as a prosecutor once specialized in child sexual assault cases addresses the Domestic Human Trafficking symposium in Los Angeles, Friday, April, 25, 2014. According to a 2005 International Labour Organization paper, human trafficking, or sexual servitude and forced labor, brings in about $32 billion annually, making it the second most profitable criminal enterprise after illegal arms trafficking. The vast majority of those trafficked are women and children, from all milieus of society. (AP Photo/Damian Dovarganes)

SALINAS, CA – NOVEMBER 01: San Francisco district attorney and democratic candidate for California attorney general Kamala Harris laughs as she sits backstage before a get-out-the-vote rally at the National Steinbeck Center on November 1, 2010 in Salinas, California. With one day to go until Election Day, Jerry Brown is wrapping up his three day campaign trip throughout California in hopes of defeating his republican challenger and former eBay CEO Meg Whitman. (Photo by Justin Sullivan/Getty Images)

In this photo taken Tuesday, Nov. 30, 2010, California Attorney General Kamala Harris gives her first news conference in Los Angeles. Harris asked a federal appeals court on Tuesday, march 1, 2011, to allow gay marriages to resume while the court considers the constitutionality of the state’s voter approved ban on same sex unions. The request came after the California Supreme Court said it needed the rest of the year to consider a legal question the appeals court said it needs answered before it can resolve the case. (AP Photo/Damian Dovarganes)

California Attorney General Kamala D. Harris at the Time Warner Cable Arena in Charlotte, North Carolina, on September 4, 2012 on the first day of the Democratic National Convention (DNC). The DNC is expected to nominate US President Barack Obama to run for a second term as president. AFP PHOTO Robyn BECK (Photo credit should read ROBYN BECK/AFP/GettyImages)

California Attorney General Kamala D. Harris speaks with supporters at the California Democrats State Convention in San Diego, CA on Saturday, February 11, 2012 in San Diego, CA. Harris has helped Californian homeowners by lobbying for a large share of federal funds to help with the massive foreclosure crisis in the state. (Photo by Sandy Huffaker/Corbis via Getty Images)

Trump Jr. entered the fray when he shared a Twitter post, which stated: “Kamala Harris is not an American Black. She is half Indian and half Jamaican. I’m so sick of people robbing American Blacks (like myself) of our history.”

The president’s son commented in his now-deleted response, “Is this true? Wow.”

Trump Jr.‘s spokesperson has since claimed to the New York Times that his tweet was “simply him asking if it was true that Kamala Harris was half-Indian because it’s not something he had ever heard before.”