‘Medicare for All’ vs. ‘Public Option’: The 2020 Field Is Split, Our Survey Shows 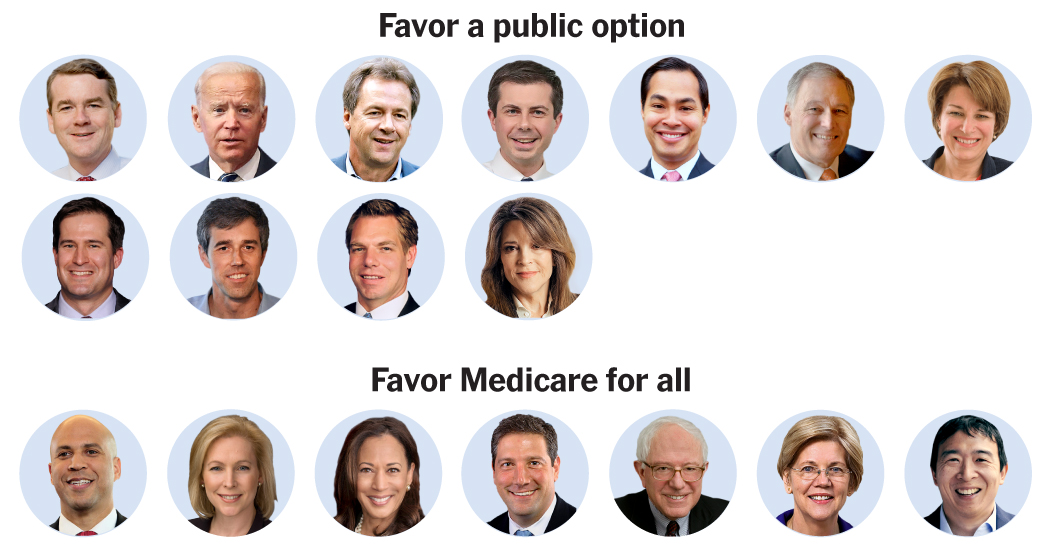 “Medicare for all” is the hottest idea in the Democratic presidential race for overhauling the nation’s health care system, and it is a phrase quite likely to be heard repeatedly at the first debates this week. But despite all the buzz, it turns out that the concept is dividing the 2020 field.

A new survey of the Democratic candidates by The New York Times finds that many of them prefer less sweeping changes than the Medicare for All Act, the single-payer bill introduced by Senator Bernie Sanders and supported by Senator Elizabeth Warren and several other presidential hopefuls. A majority of candidates in the survey — including former Vice President Joseph R. Biden Jr., the leader in early polls — said they would rather add a “public option” in the health care system that would compete with private plans.

The public option was once considered too far-reaching — champions of the idea in Congress could not muster quite enough support to include it in the Affordable Care Act in 2010. But it is now seen as a more moderate alternative to Mr. Sanders’s plan, which would all but eliminate private health insurance and enroll everyone in a government-run program.

Even some candidates who back the single-payer approach of Medicare for All told The Times they would also be willing to support a choice between some kind of public option and private insurance , an acknowledgment that many Americans like their private coverage and want the choice to keep it.

[Background reading: What is the difference between Medicare for All and a public option?]

In response to other questions, almost all of the Democrats said that undocumented immigrants should be covered under federal health care, and that Americans should be allowed to import prescription drugs from other countries.

The findings from The Times’s survey underscore that the Democratic field, like the electorate, has not moved en masse to left-wing positions on health care. While Mr. Sanders and Ms. Warren are among the most full-throated supporters of major change, influencing the conversation with their provocative ideas, many other candidates say they are inclined to try to broaden options for health care rather than wholly replace the current system of coverage with a strictly government-run one.

“We don’t need to blow up our current health care system to provide everyone with high-quality, affordable care,” Senator Michael Bennet of Colorado wrote, explaining his preference for a public option.

[The candidates’ responses are available in full here.]

Seven candidates said they preferred a “Medicare for all” single-payer system.

Mr. Sanders of Vermont popularized the idea of creating one large government-run program for all Americans in his 2016 presidential campaign. This time around, four of his rivals for the Democratic nomination are co-sponsors of his Medicare for All bill: Ms. Warren of Massachusetts, and Senators Cory Booker of New Jersey, Kirsten Gillibrand of New York and Kamala Harris of California.

All five said in the survey that such an approach was the best way to improve the health care system. “Making only minor tweaks to the status quo is not enough,” Mr. Sanders wrote, noting that tens of millions of Americans either have no insurance or cannot afford their deductibles and co-payments. His government-run insurance program would cover more services than traditional Medicare while eliminating most out-of-pocket costs.

Ms. Warren’s responses sounded almost as single-mindedly focused on the single-payer approach. “There’s no excuse for stopping at half-measures,” she wrote. (In a separate interview with The Times, she said there were “a lot of different paths for how we get there.”)

Other candidates who said they preferred a single-payer system appeared to be more open to alternatives. Mr. Booker, Ms. Gillibrand and Ms. Harris emphasized that they would also be willing to support more incremental changes like a public option, as did Representative Tim Ryan of Ohio and the businessman Andrew Yang.

Nearly 160 million Americans have private insurance through their workplaces, and most tell pollsters they are pleased with it. Many voters are not yet aware of the details of the single-payer approach, but support drops off quickly when they learn that it would eliminate private insurance and the existing Medicare program.

A public option — which, depending on the details, many candidates refer to as “Medicare for all” or “Medicare for more” — has come to be seen as a comparatively safe stance. It would not go nearly as far in overhauling American health care; instead, its supporters say, it would allow Americans to keep their private coverage while allowing some or all to choose a government-run insurance program — creating competition for private plans and potentially lowering prices.

Along with Mr. Biden and Mr. Bennet, those who said some form of a public option would be the best way to improve the health system included Mayor Pete Buttigieg of South Bend, Ind.; Senator Amy Klobuchar of Minnesota; and former Representative Beto O’Rourke of Texas.

Here’s how some candidates envision a public option working.

Mr. O’Rourke wants to automatically enroll everyone without insurance in Medicare. Those with existing private plans could either keep them or opt for Medicare, which already covers 60 million older and disabled Americans.

Mr. Bennet favors a plan known as Medicare-X, which he drafted with Senator Tim Kaine of Virginia. It would create a public option run by Medicare, but only for small businesses and people who don’t get insurance through a job. Ms. Klobuchar is also a supporter.

Mr. Buttigieg said that his ultimate goal was a system like single-payer Medicare for All, but that he preferred to start by offering a Medicare buy-in program that could eventually outcompete private insurance. “It will challenge private options to become more affordable and efficient,” he wrote. “I am skeptical that they will be able to do so.”

Mr. Biden said last week that he supported a public option that would be free for low-income people in the states that have refused to expand Medicaid under the Affordable Care Act. He has not elaborated.

One point of agreement among most respondents — in sharp contrast to President Trump and other Republicans — was that unauthorized immigrants should be eligible for coverage under Medicare for All or another government health insurance program. “Health care is a basic human right,” Ms. Warren wrote.

Several made an economic argument, pointing out that the country already pays for care for undocumented immigrants — “usually through expensive emergency rooms,” said Representative Seth Moulton of Massachusetts. He, along with Mr. Buttigieg, said undocumented immigrants should be able to buy coverage through a public option. Mr. Bennet said they should be able to buy coverage in the Affordable Care Act marketplace.

A large majority of the respondents said they supported the idea of importing prescription drugs from other countries. And all emphatically said they wanted the federal Medicare program to be able to directly negotiate drug prices with manufacturers, an idea that has broad support from Democrats but not Republicans.

“If the pharmaceutical industry will not end its greed, which is literally killing Americans, then we will end it for them,” Mr. Sanders wrote.

Here’s how the candidates say they’d pay for their plans.

Most candidates acknowledged in the survey that extending health coverage to the estimated 27 million Americans who remain uninsured would not come cheaply. Asked how they would pay for their preferred plan, many called for higher taxes on corporations and the wealthy, starting with a repeal of the 2017 Republican tax cuts.

The two biggest champions of single-payer Medicare for All, Mr. Sanders and Ms. Warren, almost completely sidestepped the financing question; Mr. Sanders maintained that by wringing out of the system premiums, co-payments and the profits of the private insurance industry, his plan “would actually end up saving the American people trillions of dollars.”

Candidates whose first choice was a public option proposed various ways to pay for it, though most would presumably rely heavily on the premiums people would pay themselves. Gov. Jay Inslee of Washington, whose state passed a public option into law this year, said a national program would be paid for by “premiums that are affordable,” though he also wanted federal subsidies for the needy.

In any event, almost all the candidates agreed that all Americans should be required to carry health insurance — a return to the individual mandate that was supposed to help Obamacare insurers avoid getting only sick customers, but that was cut by Republicans in 2017.

All rights and copyright belong to the author:
Source – https://www.nytimes.com/2019/06/23/us/politics/2020-democrats-medicare-for-all-public-option.html?emc=rss&partner=rss