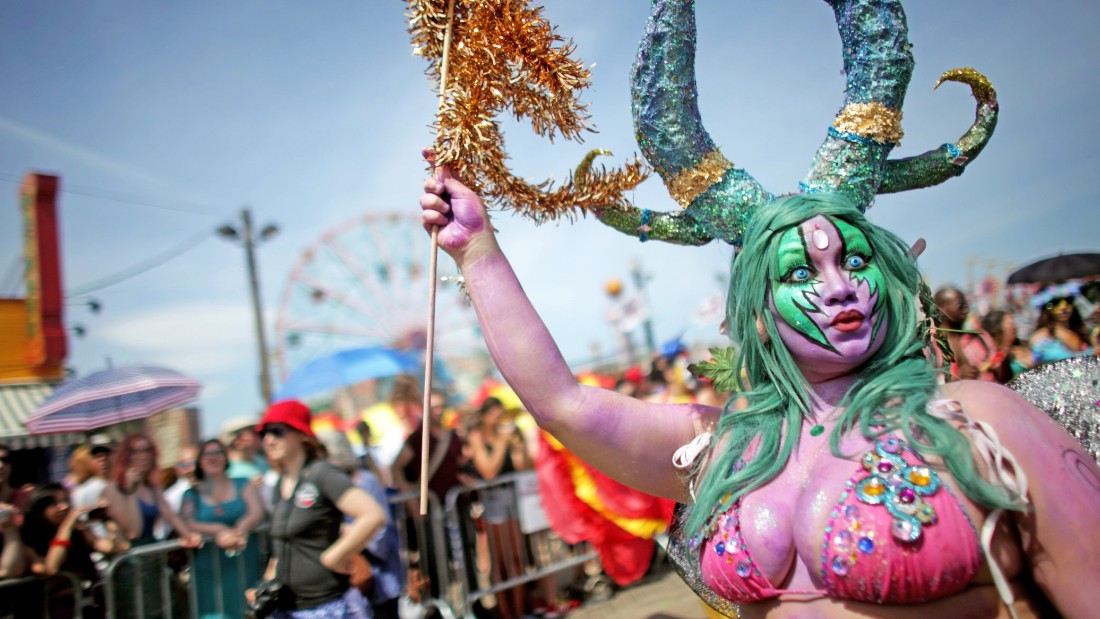 (CNN)Around the first day of summer, a gaggle (or is it a school?) of mermaids descends upon Coney Island, New York.

Creatures of the sea old and young, clothed or otherwise, take over the Brooklyn neighborhood for one day every year to celebrate art, culture and pride for their hometown in what might just be the nation’s largest art parade.

The Coney Island Mermaid Parade borrows a bit from predecessor pageants, but it’s a spectacle all its own — it’s not every weekend you can find merpeople walking on asphalt in New York.

Here’s what you need to know ahead of the 37th annual sea-themed bash on Saturday:

What is the Coney Island Mermaid Parade?

It’s a lot of things: a celebration of artists, a mythology lesson, a statement of pride.

Coney Island resident and arts advocate Dick Zigun dreamt it up in 1983 to make a name for the neighborhood’s arts scene, then maligned as an artifact of an entertainment destination past its heyday.

“We decided we’d take over the entire neighborhood one day a year and put on a wacky art parade,” he told CNN.

So he did, inviting artists to don handmade nautical-themed costumes and march, dance and float as a show of pride for their corner of New York City. What started as a local event eventually began to attract a global following.

Why do they dress as mermaids?

That’s where the mythology comes in. When Zigun moved to Coney Island in the 1970s, many of its crumbling buildings were topped with nautical stone figures, including mermaids, porpoises and Neptune clasping his trident. There are even streets named Neptune and Mermaid.

When Zigun announced mermaids would be walking on land, people balked. But sirens of the sea are an integral part of Coney Island’s history and a big draw for parade-goers.

So there’s a parade. What else happens?

Nobody would dress up if there wasn’t borough-wide glory at stake. The best-dressed compete in a beach pageant that follows the parade. But be warned: Zigun says a “beautiful mermaid doesn’t get you anything in the Mermaid Parade,” so Ariel imitators will not be rewarded.

A queen mermaid and king Neptune are crowned each year, too. This year, the royals are Arlo and Norma Guthrie, who grew up on Mermaid Avenue with their legendary singer-songwriter father, Woody Guthrie

Ahead of Saturday’s parade kickoff, Coney Island will honor the late Guthrie by renaming the street where they lived “Woody Guthrie Way.”

Stars like Queen Latifah, Debbie Harry, Lou Reed and David Byrne have all reigned over the parade proceedings throughout its history.

Does it happen the same time every year?

Yup. The mermaids march the same weekend as the summer solstice, the longest day of the year and official start to summer in the Northern Hemisphere.

Zigun originally asked the city to hold the Mermaid Parade on the Fourth of July, but officials told him the day was already too busy. So he settled on the start to summer, the season that earned Coney Island its claim to fame.

He said he modeled the parade after international summer solstice celebrations, so at the end of the route, he and a priest of varying faiths — this year, it’s a Native American shaman of the Lakota people — ask the neighborhood water spirits for good weather during the summer, booming business and safety for those who visit its beaches.

How big of a crowd does it draw?

In its first year, there were more participants than spectators. But last year’s parade was its biggest yet, Zigun said, with more than 825,000 people coming to watch. That means 140,000 more people visited the Mermaid Parade than live in Boston.

Around 3,000 participants have registered to march in the parade this year, Zigun said, either on foot and fin in carefully crafted costumes or on elaborate, people-powered floats. Rounding out the procession are 12 marching bands, 30 antique cars, a slew of dance groups and even an act called the “Wu Tang Clam.”

Is the parade family friendly?

Well, that depends on your definition of “family friendly.”

While children make up a sizable chunk of the parade’s marchers and spectators, 3,000 participants mean a wide range of interpretations of “mermaid” and what the mythical creatures wear (or don’t).

At the Mermaid Parade, glitter is considered clothing, Zigun said.

Who throws the parade?

It’s put on by Coney Island USA, a nonprofit arts organization that works to “defend the honor” of boardwalk entertainment that made the place famous. The organization operates a museum, circus sideshow and shooting gallery whose proceeds help fund the $200,000 parade along with support from the city and sponsors.

Is it similar to other parades, like Mardi Gras or Pride?

The Mermaid Parade draws inspiration from a little bit of everything, including the Fourth of July parade in Zigun’s hometown of Bridgeport, Connecticut, and New Orleans’ famous Mardi Gras celebration. Its influences are evident in the outlandish costumes, massive floats and the handmade touch that gives it its spunk.

But the Mermaid Parade is ultimately uniquely Coney Island’s, with entertainment and hometown spirit deeply embedded in its DNA.

Mermaids only walk on land once a year in one place, and it’s there.

All rights and copyright belong to the author:
Source – https://edition.cnn.com/2019/06/22/us/mermaid-parade-coney-island-trnd/index.html?utm_source=feedburner&utm_medium=feed&utm_campaign=Feed%3A+rss%2Fcnn_latest+%28RSS%3A+CNN+-+Most+Recent%29