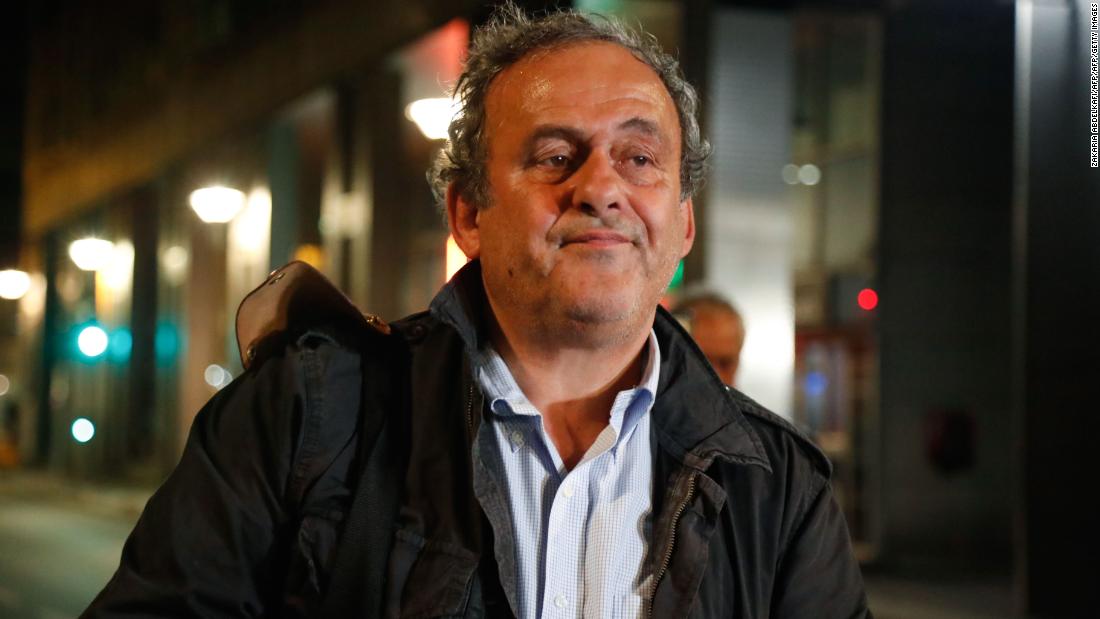 Platini, who was taken in for questioning in Paris on Tuesday, is currently serving a four-year ban from soccer that was handed down in 2015, over a $2 million payment he received from world governing body FIFA.

Upon leaving the police station later, Platini, who led UEFA, the sport’s European governing body between 2007-2015, told reporters: “I came here freely and they immediately put me in custody … It hurts, it hurts for everyone I can think of, everything I did, it hurts, it hurts.

“I have always been serene because I feel foreign to any type of business,” he added.

“It’s an old case, you know, we’ve explained it, I’ve always expressed myself in full transparency in all the newspapers, and that’s it and it’s going on, we’re doing investigations, they’re looking … That’s it. “

Platini, a three-time Ballon d’Or winner and star player of the France team which won the 1984 European Championship finals, has always denied any wrongdoing.

Platini’s lawyer, William Bourdon, told reporters he believed the case against his client was now closed.

“A lot of noise about nothing,” Bourdon told reporters after Tuesday’s events.

“During a very long hearing Michel Platini delivered his testimony in a sincere way and a precise way in response to all the questions that were put to him.

“We do not consider in any way that Michel Platini can be considered a suspect in anything, no more yesterday, than today, than tomorrow. So for us the case is closed.”

Platini’s interrogation has once again raised questions over the controversial decision to host the upcoming World Cup in Qatar, a small but wealthy Middle Eastern nation which lacks the infrastructure or sporting tradition of previous host countries. Qatari organizers have repeatedly denied allegations of wrongdoing in the bidding process.
Whispers of foul play over the decision have been heard ever since the country was appointed hosts in 2010, and such allegations have been made more openly after the US Justice Department brought racketeering, wire fraud and money laundering charges against several senior figures within FIFA in 2015.

The ensuing scandal led to investigations being opened in several countries.

Concerns over temperatures in Qatar have since forced FIFA to move the tournament to the winter for the first time ever, while watchdogs have criticized the Qatari government’s human rights record, the country’s ban on homosexuality and the welfare of workers involved in preparing stadiums for the tournament.

But calls to move the competition to a different country have so far been rebuffed. The tournament — the first World Cup to be held in the Middle East — is set to take place between 21 November and 18 December 2022, in eight locations in Qatar.

In a statement sent to CNN on Tuesday, Platini’s agent Jean-Christophe Alquier said the ex-official “has absolutely nothing to reproach himself for and affirms to be a complete stranger to all facts which are beyond his understanding.”

He added: “Michel Platini has spoken serenely and precisely, responded to all questions including those regarding the conditions of rewarding the EURO 2016, and has given useful explanations.”

Platini was quizzed on issues relating to the award of the 2022 World Cup, according to the French prosecutor, though Alquier’s statement suggests the 2016 tournament in France was also raised.

All rights and copyright belong to the author:
Source – https://edition.cnn.com/2019/06/19/football/michel-platini-qatar-2022-spt-intl/index.html?utm_source=feedburner&utm_medium=feed&utm_campaign=Feed%3A+rss%2Fcnn_latest+%28RSS%3A+CNN+-+Most+Recent%29