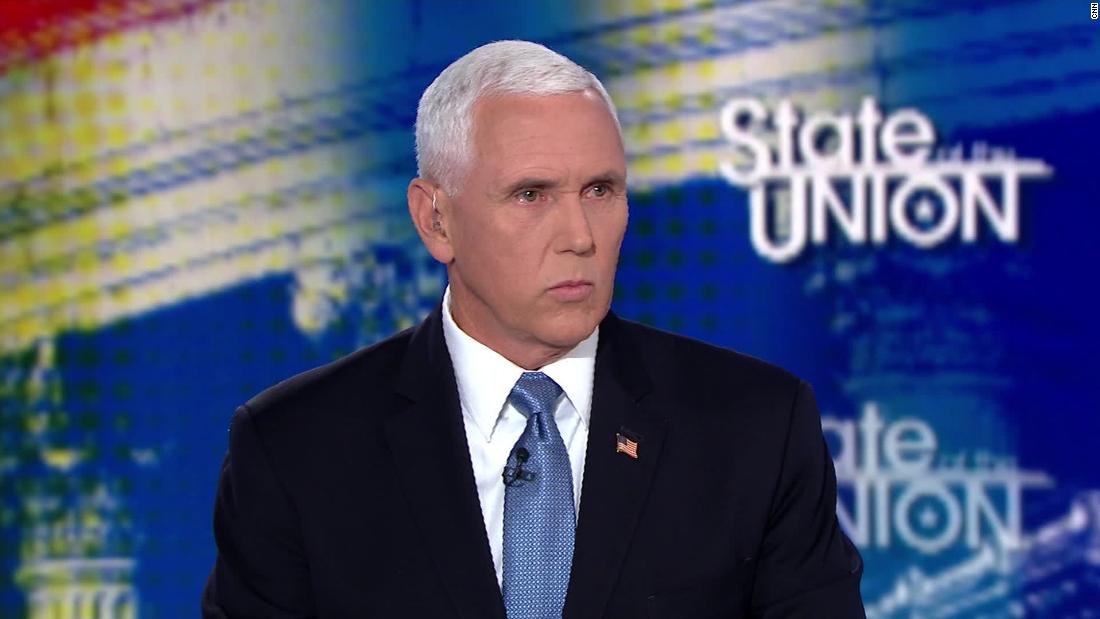 Washington (CNN)Vice President Mike Pence on Sunday wouldn’t say if he views the global climate crisis as a threat to the United States.

Pence repeatedly dodged when asked multiple times on CNN’s “State of the Union” whether the human-induced crisis is a threat to the country, telling host Jake Tapper: “Well, what I will tell you is that we’ll always follow the science on that in this administration.”

There is near universal consensus in the scientific community that the global climate emergency is man made. President Donald Trump has repeatedly made false claims about climate change.

“But what we won’t do, and the clean power plan was all about that, was hamstringing energy in this country, raising the cost of utility rates for working families across this country,” Pence said Sunday.

When pressed again on whether he believes the climate crisis is a threat, Pence said, “I think the answer to that is going to be based upon the science.”

“Well the science says yes,” Tapper said. “I’m asking you what you think.”

“Well, there’s many in the science that debate that,” Pence said.

Tapper responded, “The science community in your own administration — at (National Oceanic and Atmospheric Administration), at the (Director of National Intelligence) — they all say it’s a threat. But you won’t, for some reason.”

Pence said, “What we’ve said is that we are not going to raise utility rates.”

The Environmental Protection Agency said states can set their own carbon emissions standards for coal-fired power plants — a rule that the agency itself says could result in 1,400 more premature deaths by 2030 than the Obama-era plan it will replace.

The Obama Clean Power Plan was set to reduce greenhouse gas emissions, which contribute to the climate crisis, by up to 32% compared to 2005 levels by the same year.

“So you don’t think it’s a threat,” Tapper said.

“That’s not true,” Tapper said. “We don’t have the cleanest air and water in the world. We don’t.”

“But we’re making progress on reducing carbon emissions,” Pence said, adding, “We’re doing it through technology, through natural gas, through continuing to support, as our administration has — “

Tapper responded, “You just rolled back all these clean–“

“Turn back to nuclear energy, clean energy,” Pence continued. “The answer though is not to raise the utility rates of millions of utility rate payers.”

All rights and copyright belong to the author:
Source – https://edition.cnn.com/2019/06/23/politics/vice-president-mike-pence-climate-crisis-us/index.html?utm_source=feedburner&utm_medium=feed&utm_campaign=Feed%3A+rss%2Fcnn_latest+%28RSS%3A+CNN+-+Most+Recent%29

A sign of the world moving toward recovery from the yet-ongoing COVID-19 pandemic that shutdown everything last year has been the return of sports. One of the most symbolic and greatest feats was the execution of the Tokyo 2020 Olympics in August. Its success has paved the way for the