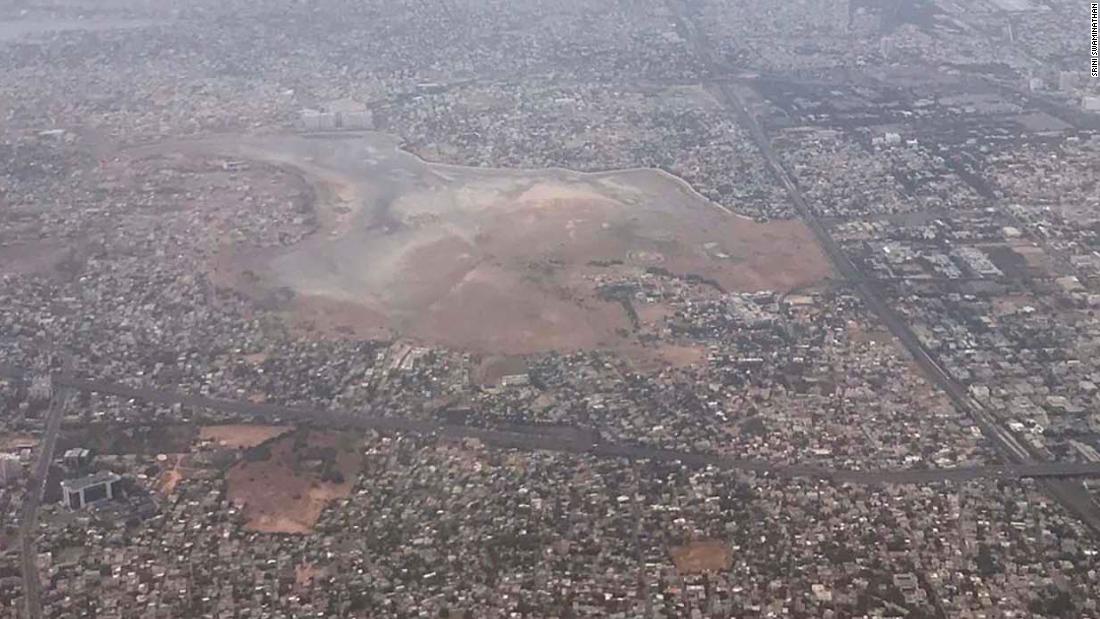 New Delhi (CNN)Millions of people are running out of usable water in the southern Indian city of Chennai, which is currently experiencing major droughts and a rapidly worsening water crisis.

At least 550 people were arrested Wednesday in the city of Coimbatore for protesting with empty water containers in front of the municipal government’s headquarters, accusing officials of negligence and mismanagement. Meanwhile, four reservoirs that supply Chennai, the state capital and India’s sixth largest city, have run nearly dry.

With low groundwater levels and insufficient rainwater collection systems, the state government has resorted to trucking water directly into Chennai neighborhoods, where hundreds of thousands of residents wait in line for their meager allocation.

“I come here every night and early morning hours to collect (water) with my neighbor and my son,” said N Bhagyalakshmi, a Chennai resident. With her sons, she lugs about 20 pots of water home every morning.

The situation in Chennai reflects an ongoing nationwide crisis as a fatal heat wave sweeps across the country, and cities from Mumbai to Delhi face dwindling water supplies.

People have begun fighting over water, with minor clashes across Chennai. Trucks bringing water into cities have even been hijacked and drivers attacked, said Jyoti Sharma, founder and president of FORCE, an Indian NGO working on water conservation.

In response to the ongoing crisis in Tamil Nadu, the Dravida Munnetra Kazhagam (DMK) opposition party is calling for state-wide protests on June 22.

Annadurai accused the state government, which is led by the All India Anna Dravida Munnetra Kazhagam (AIADMK) and is part of Prime Minister Narendra Modi’s ruling coalition, of “dismissing the reports as exaggeration by the media and the opposition.”

Annadurai added that that “restaurants have been closed, students are in schools where there is no water, people working in IT companies have been asked to stay at home.”

The state’s Madras High Court has ordered Chennai’s water supply agency to submit a report on the water scarcity crisis, due next week.

Representatives of the AIADMK did not respond to a request for comment.

Mismanagement in the face of climate change

Droughts across India are an annually reoccurring event, and smaller towns have run out of water before. But Chennai is one of the first major cities to face such severe water shortages, exacerbated by a combination of climate change, a nationwide heatwave, and poor planning.

Seasonal monsoon rains, which bring relief each year and replenish the country’s water supplies, are late this year. They usually begin at the exact same time at the start of June, and make their way across the country — but this year, the monsoon is more than two weeks late in some places.

In Chennai in particular, monsoon rains should have begun by June 1, but have yet to arrive, according to the India Meteorological Department. Rainfall over the country is only running about half of what it should be at his point of June.

Erratic rainfall has brought into sharp focus the insufficiency of alternative water harvesting systems, and residents across Tamil Nadu accuse the state government of water mismanagement.

“The soil gets saturated very fast, you don’t have water harvesting systems in place, the rivers are full, there’s no space for the water to stay — it all goes out to the sea and away from the city,” she said.

India also heavily relies on groundwater for its water needs, but decades of drilling into the earth to reach water has led to severe ground water depletion.

This depletion and dependence is particularly concerning in large cities, where at least 60% of the population live in unauthorized settlements instead of government-designated residential areas, Sharma said. Around 820,000 people live in slums in Chennai, according to a 2017 report from the Tamil Nadu government.

These low-income families, without access to expensive private water tankers or rainwater harvesting systems, are almost entirely dependent on groundwater for basic needs — and thus are hit hardest in crises like this.

“The metro water from the pipeline is mixed with sewage and it is not possible to use it,” said N Anand, a Chennai resident who has been collecting water from the government tankers every morning for the past month.

All rights and copyright belong to the author:
Source – https://edition.cnn.com/2019/06/20/india/chennai-water-crisis-intl-hnk/index.html?utm_source=feedburner&utm_medium=feed&utm_campaign=Feed%3A+rss%2Fcnn_latest+%28RSS%3A+CNN+-+Most+Recent%29