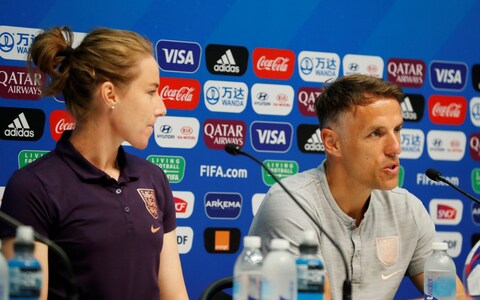 It’s the first World Cup quarter-final between Phil Neville’s England side and a dangerous and competitive Norway.

At the Stade Oceane, Le Havre.

What time is kick-off?

What TV channel is it on?

BBC One will have live coverage, with their programme starting at 7.30pm. Alternatively, bookmark this page and come back to follow all the action on our live blog.

What is the team news?

England are suffering with a virus in the camp, with head coach Phil Neville revealing Millie Bright is a ‘major doubt’ to make the game. Steph Houghton is also struggling with an ankle injury sustained against Cameroon.

Neville said: “We’re concerned about her, she’s not someone that stays down.

“It was a late tackle and we’re going to have to do everything possible to get her fit for the quarter-final.

“She’s a big player for us, our captain.”

Norway have no fresh injury concerns having reached the quarter-final with a penalty shootout victory over much-fancied Australia.

What are they saying?

Neville on his reputation for tinkering:

“You guys have had an obsession with my rotation for the last 18 months.

“But we can bring in two people who know the system and it’s a seamless transition.

“We don’t want to get to the quarter-finals and throw in young kids who are untested, so there has been a plan behind [the rotation]. I’m totally relaxed.”

What are the odds?

What is our prediction?

England’s performances have not been convincing, with their opening 45 minutes of the tournament against Scotland probably their most coherent display in France. Chance creation is proving difficult, and there are worries about fatigue particularly with the news of a virus spreading through the camp. Norway will make it difficult, but after a nervy night we fancy England will have just about enough to prevail.