One of these 12 women astronauts will go to the moon

New York (CNN Business)“One small step for man, one giant leap for mankind” is among the most recognizable quotes in modern history.

While that “man” was thought to be inclusive, Neil Armstrong’s comments were also representative of the Apollo Era astronaut corps of 50 years ago. Twelve Americans have walked on the moon, all of them men.
In fact, it wasn’t until 1983, more than a decades after Neil Armstrong and Buzz Aldrin took their historic moonwalk, that Sally Ride made her journey into space and became the first American woman to leave our planet. According to NASA, of the 347 Americans who have flown in space, 49 of them have been women.
NASA is now intent on making the moon co-ed. Its new lunar program, Artemis, has the ambitious timeline of returning to the moon in 2024, and the space agency promised that this time a woman will be making the trip.
Landing a woman on the moon could inspire a whole generation of young women, said NASA Administrator Jim Bridenstine. “I’ve got an 11-year-old daughter and I want her to see herself as having every opportunity that I saw myself having when I was growing up,” he said.
“I think this could be transformational for young women all across, not just the country, but all across the world.”
While NASA is keeping mum about who the female astronaut will be, in a recent interview with CNN Business, Bridenstine gave a few details … and we ran with them.
Here are the hints:
“She is already in the astronaut corps. It will be somebody who has been proven, somebody who has flown, somebody who has been on the International Space Station already,” Bridenstine said. “We’re looking for, of course, the most qualified candidates, and we have some amazingly talented and highly-qualified candidates.”
There are 38 active astronauts in NASA’s astronaut corps. Of those, 12 are woman. They are between the ages of 40 and 53; they are doctors, CIA agents, scientists and military pilots. NASA has an incredible pool to pull from. Here they are: 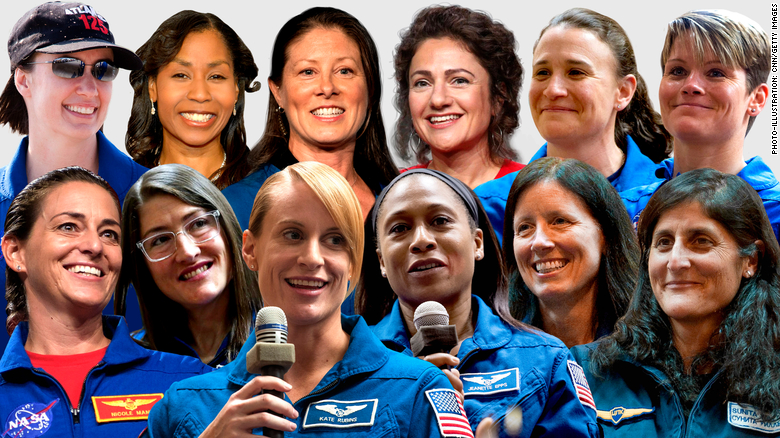 Board-certified in both internal and aerospace medicine, Auñón-Chancellor’s work at NASA began in 2006, when she served as a flight surgeon. NASA assigns a flight surgeon to crewed missions to serve as a groud-based medical consultant for astronauts while they’re in space.
Auñón-Chancellor was selected for the astronaut corps in 2009. She held the role of Deputy Lead for Orion, Medical Operations. She has flown to space just once, in 2018, when she did a long stint on the International Space Station, clocking 197 days in space.

Selected as an astronaut in 1998, Tracy has flown twice to ISS, once on board Space Shuttle Endeavor in 2007 when she logged 12 days in space, and then again in 2010, when she launched aboard a Russian Soyuz spacecraft. Her second stint on ISS was a long-duration mission, where Dyson racked up 176 days and conducted three spacewalks. She also has a Ph.D. in chemistry.

Epps was selected as an astronaut in 2009. Prior to joining NASA, Epps was at Ford Motor Company where her work led to a US patent. She then worked for the Central Intelligence Agency for seven years as a technical intelligence officer. Epps currently serves in the ISS Operations Branch supporting ISS crews.
Jeanette has not yet flown to space. She had been assigned to be a flight engineer for a 2018 expedition but was replaced by Serena Auñón-Chancellor. It’s not clear why she was removed from the mission.

Selected for the astronaut program in 2013, Koch is an engineer and is currently aboard the space station for her first spaceflight. She arrived at the ISS in March and is slated to stay until February 2020, which means she is expected spend nearly a year in space. If the schedule holds, she’ll surpass Peggy Whitson, who currently holds the title of longest single spaceflight of a woman with 288 days in space.
Koch recently preformed her first space walk. Many see her as a frontrunner for the pick for Artemis.

Selected for the astronaut program in 2013, Mann is an engineer and is currently training for the first crewed test flight of Boeing’s Starliner spacecraft, which is being built for NASA’s commercial crew program and could launch before the end of the year. She’s also a former military pilot.
She led the astronaut corps in the development of NASA’s Orion spacecraft and Space Launch System rocket, which the space agency plans to use for the lunar mission. But Mann has not flown to the ISS.

Selected as an astronaut in 2000, McArthur served as the mission specialist on board the final space shuttle journey to the Hubble telescope in 2009, logging nearly 13 days in space. She has a Ph.D. in oceanography and completed her graduate research at the Scripps Institution in San Diego, California. She also has a degree in aerospace engineering from UCLA.
McArthur has not traveled to the International Space Station.

McClain was selected for the NASA astronaut corps in 2013. She’s an engineer, Lieutenant Colonel in the army, and a senior Army Aviator who has tallied over 2,000 flight hours in 20 different aircraft. She is currently on the space station and has conducted two spacewalks. She is set to return on Monday, June 24, and she’ll have logged just over 6 months in space. Her call sign in Animal, and at 40-years-old, she is the youngest member of the astronaut corps.

Meir was selected by NASA in 2013 into the astronaut program. The daughter of two immigrants, she holds degrees in biology, marine biology and space studies and is a private pilot.
She worked for Lockheed Martin from 2000 to 2003 supporting human physiology research, and she spent time as an aquanaut at NASA’s underwater habitat off the coast of Florida, called Neemo.
Meir has yet to reach space, but she’s scheduled to fly to the ISS later this year and will remain there for six months.

Selected by NASA in 2009 for the Astronaut Corps, Rubins logged 115 days in space onboard ISS in 2016. Rubins is a microbiologist who has spent conducted research with smallpox, Ebola and Marburg viruses.
Rubins was the first person to sequence DNA in space and has conducted two spacewalks.

Walked was picked to join the Astronaut Corps in 2004 and spent 163 days in space in 2010. She’s a physicist by training, and she served as the flight engineer during the mission.
She holds a bachelors degree is physics and a master’s and doctorate degree in space physics from Rice University.

Wilson was selected for the astronaut corps in 1996, and has completed more trips to space than any of her female colleagues. She’s flown on three space shuttle missions: in 2006, 2007 and 2010. All told, Wilson has logged more than 42 days in space.
She has a baclor’s degree in engineering science from Harvard and a master’s in in aerospace engineering from the University of Texas. Her graduate research was funded by a NASA fellowship and focused on the control and modeling of large, flexible structures in space.

Williams was selected as an astronaut in 1998. She’s flown twice to space, first in 2006 when she completed four spacewalks and spent over six months on the space station. She completed her second mission in 2012, during which she spent four months in space.
She is currently training to be an astronaut on Boeing’s Starliner and is slated to conduct her third long-duration space mission aboard ISS. All told, Williams has spent a total of 322 days in space with more than 50 hours of spacewalk time.
–Correction: A previous version of this story misstated the date of Sally Ride’s journey to space.
All rights and copyright belong to the author:
Source – https://www.cnn.com/2019/06/21/tech/nasa-moon-female-astronaut/index.html

Brexit: 'Dozen' Tories could back no confidence vote, says Ellwood