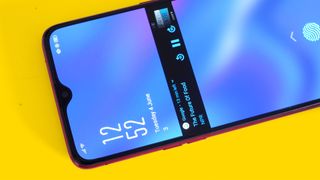 There could be an exciting new technology milestone just around the corner, after an image which heavily suggests Oppo will launch a smartphone with a camera built under the display appeared online.

According to an image posted on Weibo (a Chinese social network), Oppo is planning on launching a new handset on June 26 during MWC Shanghai. The artwork on the image appears to show a ring highlighting where the camera is placed below the screen.

If this is what Oppo is hinting at (if the poster itself is genuine), it would allow the phone to have an uninterrupted display with no notch, or punch-hole camera (like the Honor 20 and Samsung Galaxy S10), while also removing the need for a mechanically rising camera as found on the Oppo Reno 10x Zoom and OnePlus 7 Pro.

Whether or not the handset while be unveiled on June 26, and if it will actually be available to buy, is currently unknown.

Oppo could just show off the technology working on a demo device, or the handset may only get a limited release in certain markets. We’ll have to wait and see what (if anything) is announced on stage.

We’ve seen this before

This isn’t the first we’ve heard of the technology, as earlier in June, Oppo posted a short video showing off its in-display selfie camera working on a prototype device.

It seems the technology is almost ready for commercial release, but if it does arrive this year expect a hefty price premium on the first handsets to use it – new technology isn’t cheap.

All rights and copyright belong to the author:
Source – https://www.techradar.com/news/oppo-may-launch-the-worlds-first-phone-with-under-display-camera-on-june-26