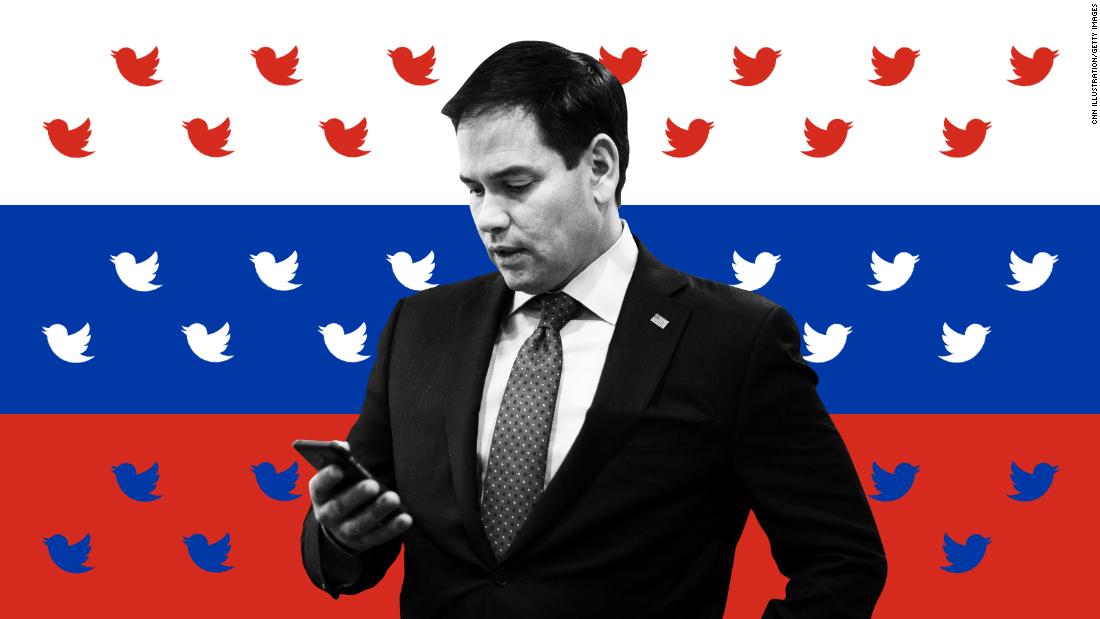 The fake tweet posted last summer appeared to show the Florida Republican warning that British spies would use deepfake videos in an effort to get more Democrats elected. In reality, Rubio had tweeted about the risks of Russia using deepfakes, convincing fake videos that use new artificial intelligence technology.
Facebook took down a network of accounts last month that it said emanated from Russia. Experts at the Atlantic Council’s Digital Forensics Research Lab, which partners with Facebook, found that one of the accounts taken down repeatedly posted the fake Rubio tweet.

A screenshot showing the fake tweet appears to have originally been posted online on a relatively obscure website last summer on August 1 and was picked up by the Facebook account and shared with three other Facebook groups the following day. The fake tweet was never posted on Twitter, instead the people who forged it seemingly created it using image editing software.

While the fake tweet does not appear to have picked up significant traction online, it did form the basis of a story by RT, the Russian state-backed media company, in August 2018.

RT’s German language service posted an article that claimed it was “astonishing” that Rubio would accuse one of America’s closest allies of “interfering in the upcoming elections.”

RT’s press office pointed out to CNN that RT had added an “editor’s note” to its story saying Rubio denied writing the tweet. RT did not correct the article.

‘A powerful weapon we should not take lightly’

Soon after CNN contacted Rubio’s office on Thursday, the Senator tweeted out a screenshot of the fake tweet and wrote, “#Russia created this realistic looking image & then had it posted online in blogs & fringe news sites.”

Adding, “Now imagine if image was of a fake tweet from leader in a part of world with tensions running high. Or if it was a deep fake video that exacerbated bilateral tensions between two nations on the brink of war. Information warfare is a powerful weapon we should not take lightly.”

The report features other numerous false claims, including one involving British MP Boris Johnson, a current candidate to be prime minister, and another with disinformation about tensions in Northern Ireland, which were also shared using similar methods by the same account, the researchers found.

Researchers say that although the disinformation campaign’s reach was small, it effectively used smaller blogging platforms and online forums to “plant and amplify forgeries, fake stories, and divisive content.”

Major tech companies like Facebook, Twitter, and YouTube have taken steps to combat manipulation of their platforms as a result of public and political pressure following Russia’s efforts to use social media to interfere in the 2016 US presidential election.

But, Atlantic Council researchers say, on small platforms it “remains disturbingly simple for malicious actors to create false profiles on these platforms and use them as a launch pad for disinformation.”

One of those platforms, it seems, is Indybay, a volunteer-run San Francisco-based blog that allows open contributions.

A post on Indybay that had repeated the false allegations in the fake Rubio tweet was removed from public view after the site was contacted by CNN.

A volunteer that works with Indybay, who asked not to be named, says the site’s moderators see suspicious posts like that one every few weeks and remove them.

It’s not the first time an independent online organization has been targeted like this.

After the 2016 election, it emerged that suspected Russian military intelligence agents had planted stories in Counterpunch, an independent left-wing website and magazine, using the pseudonym “Alice Donovan.” Counterpunch removed all the posts following an investigation.

Little is known about who is behind the most recent campaign, other than Facebook’s assessment that at least some of the accounts involved emanated from Russia.

Atlantic Council researchers concluded in their report, “The scale of the operation, its tradecraft, and its obsession with secrecy, indicate that it was run by a persistent, sophisticated, and well-resourced organization, possibly an intelligence agency.”

The Kremlin as a matter of routine denies interference in the domestic political processes of the US and other countries, and denies any state involvement in the 2016 presidential election interference.

All rights and copyright belong to the author:
Source – https://edition.cnn.com/2019/06/22/politics/russia-fake-rubio-tweet/index.html?utm_source=feedburner&utm_medium=feed&utm_campaign=Feed%3A+rss%2Fcnn_latest+%28RSS%3A+CNN+-+Most+Recent%29