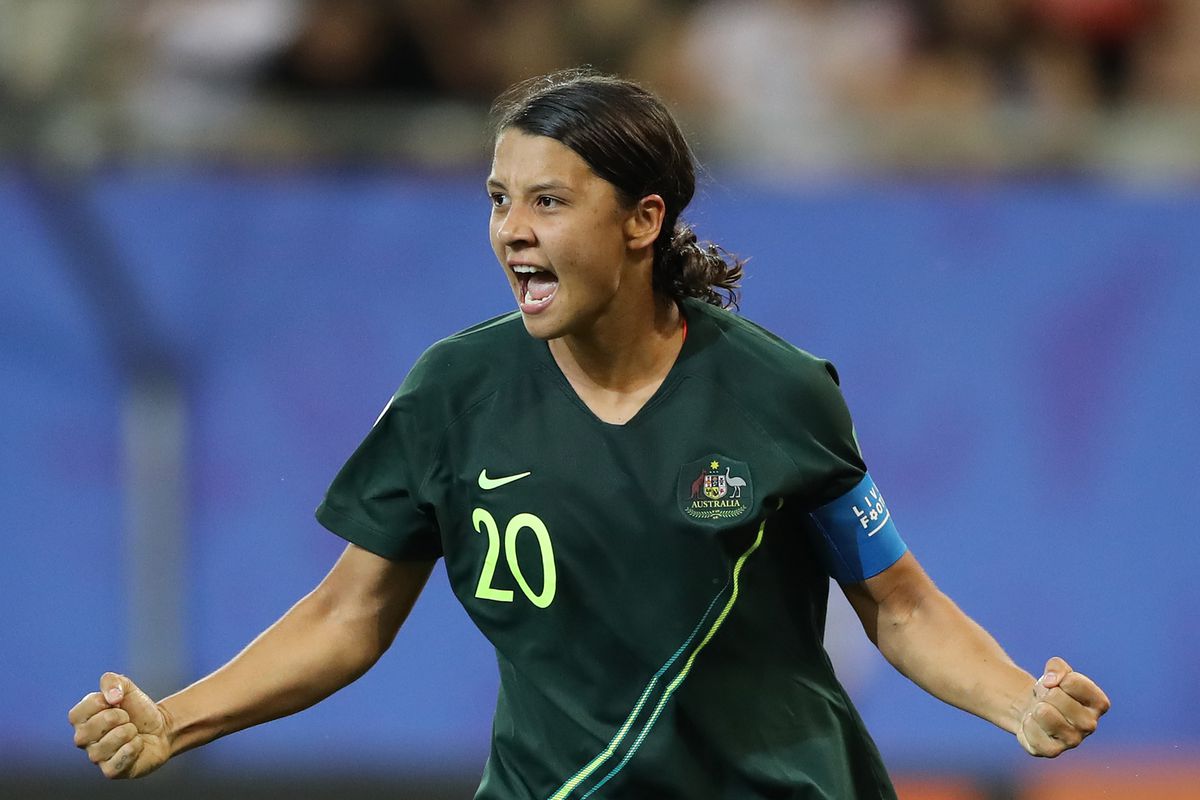 Sam Kerr is supposed to win the World Cup Golden Boot. Australia is depending on her to do so. And — completely unfairly! — she won’t get the international recognition she deserves unless she claims the prize. No individual player is under more pressure to deliver big performances at this World Cup.

So far, Kerr is on pace to capture that Golden Boot. She’s tied with Alex Morgan with five goals in the tournament after her four-goal performance against Jamaica.

Kerr’s goals moved Australia up into second in its group, setting up a Round of 16 match against Norway. And the goals were very much needed — a one or two-goal victory over Jamaica could have set up a match against powerhouses Germany or France, against whom the Matildas would’ve been considered huge underdogs.

But considering Australia’s group stage performance, it’s unlikely its match against Norway will be a cakewalk. The patchwork Matildas defense was embarrassed by Italy, seriously tested by Brazil, and gave up a goal to Jamaica, who had been shut out in its previous two matches.

The only way Kerr is going to win the Golden Boot is if Australia goes far in this World Cup, and the only way Australia is going to go far is if Kerr carries them. Given what we’ve seen from her thus far in the tournament, and her previous displays for both club and country, it seems she’s capable of just that.

Watching her now, it’s hard to believe there was ever a time when Kerr seemed as though she’d not live up to her potential. She made her Australia debut at age fifteen, but scored just eight goals in her first seven years with the team. She didn’t have a double-digit scoring season in her first four NWSL campaigns. Kerr was an outstanding athlete, but an average striker.

And then something happened in 2017. Kerr started scoring, scoring in almost every game, for club and for country. On July 9, 2017, Kerr did this.

She scored in her next two NWSL games too. Then, at the end of the month, she suited up for Australia and scored this hat trick against Japan.

At that moment, it was clear that Sam Kerr had arrived, and she’s been on a constant upward trajectory since. Kerr is now NWSL’s all-time leading scorer, and has scored twenty-eight goals in the last three years for the Matildas.

It seemed like Kerr had, with little warning, flipped a switch, finally becoming an elite striker nearly eight years into her professional career, but her late bloom makes sense given that she only came into the sport three years before making her professional debut. Kerr didn’t start playing soccer until she was 12, having previously played Australian football.

She told the Telegraph:

“The change from AFL to football was really hard. I remember I struggled a lot. I had acquired so many skills from playing during my whole childhood and all of a sudden it was like the ground had been ripped out from underneath me and I went from being one of the best players in the team to not even starting on the field. I was struggling to control the ball and learning a whole new skill set. It was a difficult change, but I guess as the years went on, I realized how beautiful the game of football is.”

Kerr also grew up and turned a corner professionally at a time a lot of people in many fields do, when she was 23. After winning the 2017 Asian Women’s Footballer of the Year award, Kerr said, “Honestly, I’ve just grown up and I think I’m at that age now where I realize that this is my life, this is my job, and I’ve taken that completely seriously.”

That breakout 2017 season, when she carried a poor Sky Blue FC team to respectability and playoff contention, prepared her for what she now faces at the World Cup. Injuries to Laura Alleway and Clare Polkinghorne have left the Australia defense in shambles. The Matildas took six points from three games, but committed serious defensive errors leading directly to goals in all three matches, and will likely have their errors punished more harshly when they face top teams in the knockout stages.

With the Australian defense showing no signs of improving, the pressure is on Kerr to guide her team to wins in wild shootouts. And while it’s unfair to her, if she fails to score in an Australia loss, she’s the one likely to catch the blame for not stepping up when her team needed her most.

The tournament is also Kerr’s only chance to finally gain the international recognition she deserves. She won’t be thinking about individual awards while she’s trying to win a World Cup, but this is a vital opportunity for her to finally be considered a serious contender for FIFA’s Women’s Player of the Year award. A few goals and wins at the World Cup shouldn’t matter more than the rest of her resume, but it always does with awards voters.

Scoring nearly a goal per game for her clubs and country hasn’t been good enough for Kerr to collect enough votes to be a finalist over the past two years. Astonishingly, she hasn’t been close, finishing 10th in 2017 and 9th in 2018. Lieke Martens won the 2017 award after winning the Golden Ball at the UEFA Women’s Championship, and with no international tournament to lean on in 2018, voters went for previous winner Marta.

Saturday’s match against Norway shouldn’t be very important to Kerr’s career. She is not responsible for the mismanagement of Australia’s defense. She arguably plays at a higher level than the World Cup on a weekly basis in NWSL. And this small sample of World Cup games shouldn’t define her more than the hundreds of goals she’s scored in other competitions. But it does.

This one tournament, over just one month, is what sponsors, media executives, and awards voters focus on. As far as they’re concerned, Kerr’s entire body of work is irrelevant. The last four years, and the trophies Kerr competed for, might as well have just been practice for this moment.

So, here it is. One knockout stage of one tournament to define what most people think about when they think of Sam Kerr for the next four years.