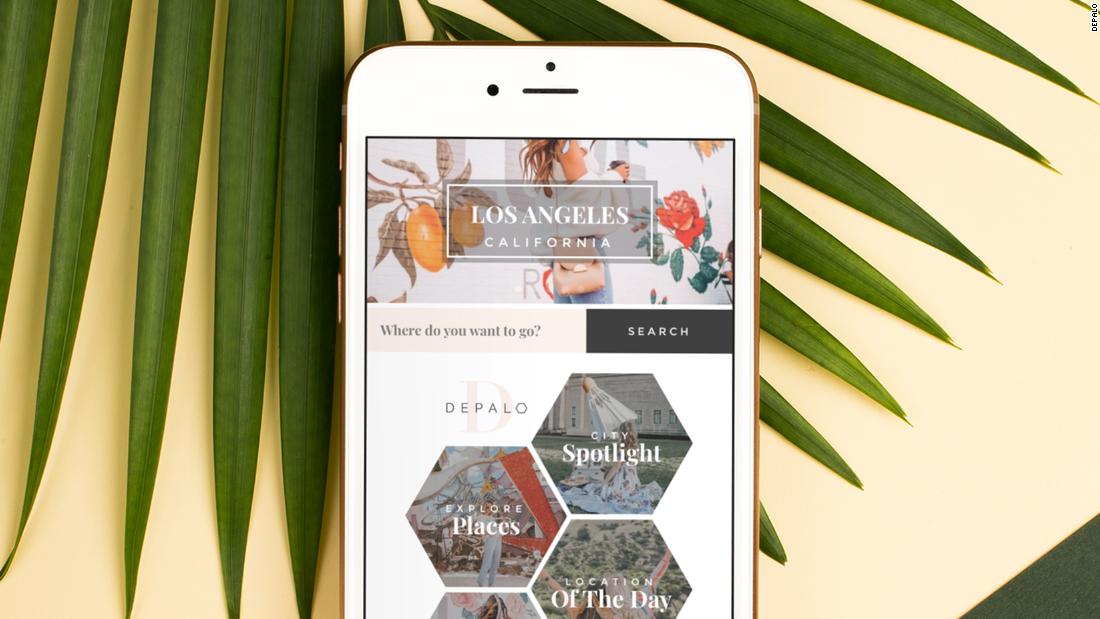 New York (CNN Business)Wonder Bar in Austin is basically an Instagram playground. It has it all: bright yellow banana swings, a bathtub filled with rubber duckies, a rideable unicorn and neon signs galore that say things like “Head in the clouds” and “Searching for Uranus.”

Aneloski, who has roughly 134,000 followers on Instagram, typically spends hours researching “Instagrammable” spots before traveling somewhere to make sure she has ample content for her online posts.

But on one quick day trip to Sedona, Arizona, in 2017, Aneloski didn’t have time to find nearby photo locations. That’s when she got the idea to streamline the “location scouting process for creatives,” she told CNN Business.

The app is for people who make money off their social media posts, also known as influencers or content creators, as well as millennials who want to find unique — and social media friendly — places while traveling.

Over 40% of people under 33 years old factor in how Instagrammable their vacation will be when deciding on a travel destination, according to a 2018 survey by UK-based home insurance provider Schofields.

“We live in a culture in which, some would say, we’re slaves to photographing everything we see. It’s a compulsion we have,” said Paul Levinson, a professor at Fordham University who studies social media. “This app fits perfectly into that culture.”

Every location featured on Depalo includes tips, such as how to get there, parking availability and suggestions for capturing the best photo (like visiting in the early morning to beat crowds, because who wants strangers in their shot?). It also shows Instagram photos from influencers who have visited that location.

For example, one of Chicago’s Instagram destinations is Punchbowl Social, an arcade bar with a wall of pastel colored, vintage-style laundry machines and laundry-cart-inspired tables. (You can’t do any actual laundry on the premises). The app suggests grabbing a drink and food and “snapping away” at this Instagrammable part of the bar, which also features a bowling alley, a giant Scrabble board and a wall of fake shipping containers.

There is also a section on the app called “Where’s the wall?” which shows murals in the area. Artsy walls, it seems, are particularly popular on Instagram. (There was even briefly an angel-wing mural in Los Angeles that only influencers with a certain number of followers could pose in front of.)

“People love taking photos outside of walls and now they have all of that in one place,” Aneloski said. “It’s so hard to find the address to those walls.”

However, there is some fatigue from too many Instagram posts of the same popular hot spots, according to Beca Alexander, founder and president of influencer casting and marketing agency Socialyte.

“I worry this just makes it easier for everyone to just continue posting the exact same content,” Alexander said of Depalo. “But if the founder can continue curating the app in a way so that you truly see what’s new and exciting, that’s going to be super interesting and helpful for consumers and other influencers.”

Alexander also said people sometimes go to Instagrammable spots just for a photo, not always to try the food or product the business is selling, which she says isn’t a good thing.

“These places and restaurants are trying really hard to cater to the ‘grammers, but they’re not always seeing the benefit of it financially,” she said. “People are just going for the sake of taking a photo.”

Aneloski said she works to strike a balance between featuring popular places and spots that aren’t as well known. She has also spoken with some businesses to make sure they feel positively about being featured in the app.

“We encourage people to do business while they’re there, not just show up and take a photo. We definitely want to uplift these local businesses,” she said. “We think too that if they are going to make their place pretty Instagrammable, it’s almost expected in this day and age to have people snapping photos in that space.”

Depalo will add a new US city each week, and Aneloski hopes to expand internationally next year. It’s only available on iOS for now, but an Android version is in the works.

Aneloski has a team of 10 part-time employees working on Depalo, including developers and public relations specialists. For now, she is personally funding the app, but will explore ways to monetize it in the future, such as through ads.

In response to critics who say young people are too obsessed with getting a good photo for social media, Aneloski says: “Sharing photos is a way millennials communicate. Photos tell a story. They tell where you’re at, who you’re with, and what you’re doing. … And people want to share their story with other people.”

All rights and copyright belong to the author:
Source – https://edition.cnn.com/2019/06/22/tech/instagrammable-places-depalo-app/index.html?utm_source=feedburner&utm_medium=feed&utm_campaign=Feed%3A+rss%2Fcnn_latest+%28RSS%3A+CNN+-+Most+Recent%29