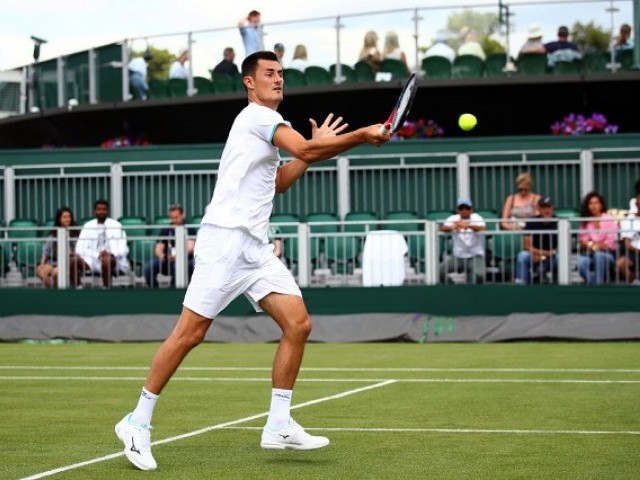 LONDON: Australia’s Bernard Tomic was stripped of his entire £45,000 ($56,600) Wimbledon prize money on Thursday for tanking in his first round match which was over in just 58 minutes but the decision was blasted as “outrageous” by equally fiery compatriot Nick Kyrgios.

“I don’t agree with fining the guy all of his prize money. He earned his right to be in the draw,” said Kyrgios.

“He played the whole year. He’s obviously winning enough to be at the most prestigious tournament in the world. To take all his prize money I think is outrageous.”

The controversial Tomic, who has previously been accused of not trying in his career, lost 6-2, 6-1, 6-4 to France’s Jo-Wilfried Tsonga on Tuesday.

“It is the opinion of the referee that the performance of Bernard Tomic in his first round match against Jo-Wilfried Tsonga did not meet the required professional standards,” the All England Club said in a statement.

“Therefore he has been fined the maximum amount of £45,000 which will be deducted from prize money.”

The best-of-five-sets match against Tsonga was the shortest men’s match at the tournament so far and the second quickest overall after Elise Mertens’ 48-minute win over Fiona Ferro in the best-of-three women’s event.

“I think I played as best as I could. It’s just I played terrible,” said the world number 96 Tomic, who was a top 20 player in 2011 when he reached the quarter-finals at Wimbledon.

Since then, he has often been dubbed ‘Tomic the Tank Engine’ by a critical Australian media.

When he was asked if he was happy with the effort he was making on court at Wimbledon, he snapped: “Next question” and refused to answer other questions.

Tomic has run foul of the Wimbledon authorities in the past.

Two years ago, he was fined after admitting he had faked an injury and complained of being bored in defeat to Germany’s Mischa Zverev.

His racquet sponsor Head dropped him as a client.

At the French Open this year, Tomic slumped to a straight-sets first round loss to Taylor Fritz in just 88 minutes.

Tomic has never been far from controversy.

In 2015, he was arrested in Miami after a late-night penthouse party while, in 2018, he boasted about his income.

“I just count money, that’s all I do. I count my millions,” he said after failing to get through qualifying at the Australian Open.

At the US Open in 2017, he told journalists: “I’m not the smartest person in the world.”

Tomic is not be the first player to be fined for alleged lack of effort in recent weeks.

Anna Tatishvili of the United States was stripped of her first round prize money at Roland Garros for “not playing at a professional standard”.

She lost to Greece’s 33rd-ranked Maria Sakkari, 6-0, 6-1 in 55 minutes — only three minutes fewer than Tomic who had played a set more.

Tatishvili had returned to competition following a 31-month absence due to a serious ankle injury and multiple surgeries.

Former US Open champion Sloane Stephens said she was concerned that tournaments were acting unilaterally on the issue.

“If the tournaments are going to be their own judge and say they’re going to do that, then I can’t say I’m 100 percent onboard,” said the American.

“I saw some of the Tatishvili match. She played Sakkari. She’s not playing a scrub.

“There’s a back story about her ‘protected ranking’ and being forced to play basically or you lose it, there is a lot of that that goes into it.

The divisional round of the playoffs: Green Bay Packers face Los Angeles Rams to Lambeau Field at 4:35 p.m. ET. Los Angeles’ defense stymied the Seahawks in a 30-20 win last week, and the Packers are coming off a bye. The game will be televised to a national