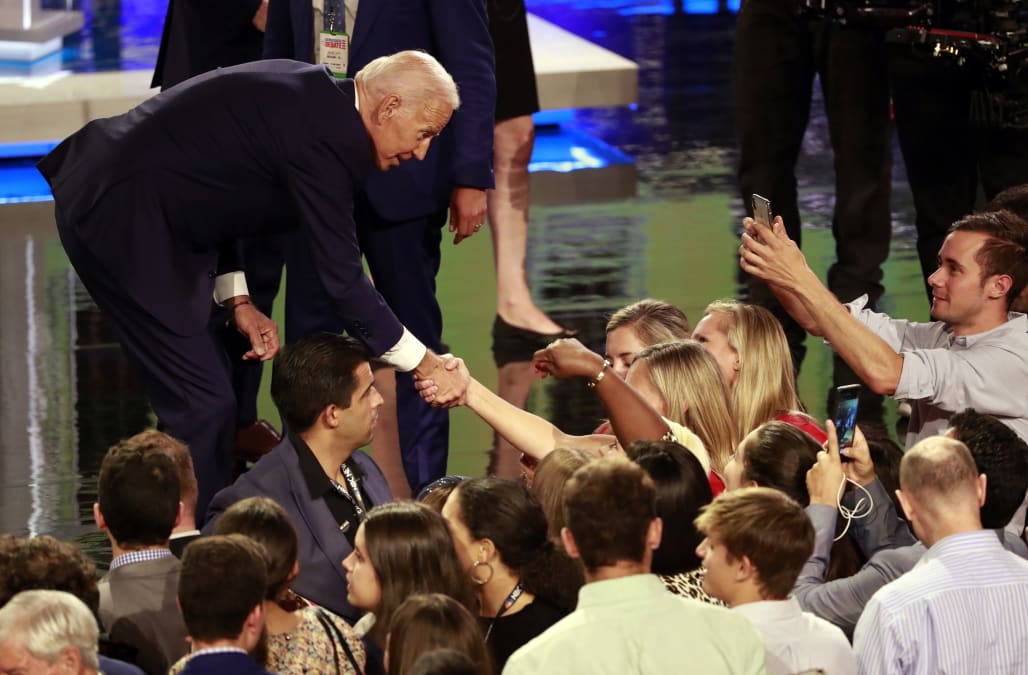 The Trump campaign Thursday night sent out 13 “rapid response” emails about the debate, most of them were defending Trump’s record. Two of the messages attacked other Democrats and four were focused on Biden.

The missives from the Trump campaign highlighted Biden’s reliance on wealthy donors, how immigrants were treated at the border during the “Obama-Biden” administration, and comments Biden made indicating China wasn’t major competition for the U.S., and accused him of repeatedly being wrong on national security issues.

The Biden campaign did not immediately respond to a request for comment on this story.

Democratic politician Joseph R. Biden Jr, the United States Senator from Delaware, circa 1980. He became the US Vice President in 2009 under President Barack Obama. (Photo by Nancy Shia/Archive Photos/Getty Images)

American politician and US Senator (and future US Vice President) Joe Biden smiles in a ‘Bicentennial Minutes’ segment, a series of nightly shorts commemorating the bicentennial of the American Revolution which aired from 1974-1976, August 12, 1974. (Photo by CBS Photo Archive/Getty Images)

WASHINGTON, : US Senator Joe Biden(D-DE) briefs reporters prior to the 15 January start of the second day of the US Senate impeachment trial of US President Bill Clinton on Capitol Hill in Washington, DC. House prosecutors will summarize their case against the president 15 January. (ELECTRONIC IMAGE) AFP PHOTO/Luke FRAZZA (Photo credit should read LUKE FRAZZA/AFP/Getty Images)

392389 02: U.S. President George W. Bush meets with members of the Senate and House foreign policy leadership in the Cabinet room at the White House July 25, 2001 in Washington, DC. Seated next to the president is Sen. Joe Biden (D-DE). (Photo by Mark Wilson/Getty Images)

UNITED STATES – MAY 12: Democrat vice chairman of the Senate Foreign Relations Committee Senator Joe Biden (D-DE), throws up his hands as he speaks during debate on the nomination of John Bolton as US Ambassador the the United Nations May 12, 2005 in Washington D.C. (Photo by Joe Marquette/Bloomberg via Getty Images)

WASHINGTON – JULY 12: U.S. Senator Joseph Biden (D-DE) speaks during the Senate Foreign Relations Committee hearing on ‘North American Cooperation on the Border’ on the Border’ on Capitol Hill July 12, 2005 in Washington, DC. The committee discussed border security and how to work together to secure the borders with Mexico and Canada. (Photo by Joe Raedle/Getty Images)

WASHINGTON, DC – JANUARY 23: U.S. Vice President Joe Biden (C) talks with mayors from across the country, including Milwaukee Mayor Tom Barrett, in the Roosevelt Room of teh White January 23, 2014 in Washington, DC. The U.S. Conference of Mayors is holding its annual conference in Washington this week. (Photo by Chip Somodevilla/Getty Images)

US Vice President Joe Biden speaks during the Civil Society Forum on the sideline of the US-Africa Leaders Summit in Washington, DC, on August 4, 2014. Washington aims to wake up US business to the opportunities in Africa with the landmark US-Africa Leaders Summit this week, as China and Europe steal a march on the world’s fastest-growing continent. As many as four dozen African leaders, and hundreds of businessmen with them, will for their part be looking to see if US investors and traders can move beyond old stereotypes of a continent mired in conflict and corruption and recognize its huge potential. AFP PHOTO/Jewel Samad (Photo credit should read JEWEL SAMAD/AFP/Getty Images)

US President Barack Obama speaks to US Vice President Joe Biden after Biden introduced him during a signing ceremony for H.R. 803, the Workforce Innovation and Opportunity Act, on July 22, 2014 in the South Court Auditorium of the Eisenhower Executive Office Building, next to the White House in Washington, DC. AFP PHOTO/Mandel NGAN (Photo credit should read MANDEL NGAN/AFP/Getty Images)

COLORADO SPRINGS, CO – MAY 28: Vice President of the United States Joe Biden takes a selfie after the commencement ceremony at Air Force Academy in Colorado Spring, May 28, 2014. Biden spoke during the ceremony. (Photo by RJ Sangosti/The Denver Post via Getty Images)

US Vice President Joe Biden gestures as he speaks at Ledra palace in the UN-patrolled Buffer Zone in Nicosia on May 22, 2014. Biden met Cyprus leaders Thursday to spur talks on ending the island’s 40-year division and seek support for threatened sanctions against Russia despite the economic cost. AFP PHOTO/ ANDREW CABALLERO-REYNOLDS (Photo credit should read Andrew Caballero-Reynolds/AFP/Getty Images)

US Vice President Joe Biden adresses a speech to students and officials at Cotroceni Palace, the Romanian Presidency headquarters in Bucharest on May 21, 2014. Tougher sanctions must be imposed on Russia if it undermines crucial presidential elections in Ukraine on May 25, 2014, US Vice President Joe Biden said in Bucharest. AFP PHOTO DANIEL MIHAILESCU (Photo credit should read DANIEL MIHAILESCU/AFP/Getty Images)

WASHINGTON, DC – APRIL 29: U.S Vice President Joe Biden speaks during an event on protecting students from sexual assault at the Eisenhower Executive Office Building April 29, 2014 in Washington, DC. During the event, Biden announced the release of the first report of the White House Task Force to Protect Students from Sexual Assault. (Photo by Win McNamee/Getty Images)

US Vice President Joe Biden waves upon arrival for a meeting with Lithuania’s President in Vilnius on March 19, 2014. Biden meets today with Lithuanian President Dalia Grybauskaite and Latvian leader as part of a tour to reassure NATO allies during the Ukraine crisis. AFP PHOTO / PETRAS MALUKAS (Photo credit should read PETRAS MALUKAS/AFP/Getty Images)

US Vice President Joe Biden listens during a meeting with the Polish Prime Minister in Warsaw, Poland on March 18, 2013. Biden arrived in Poland for talks with regional allies as Russia tightened its grip on the Ukraine’s breakaway region of Crimea. AFP PHOTO / JANEK SKARZYNSKI (Photo credit should read JANEK SKARZYNSKI/AFP/Getty Images)

THE VIEW – Joe Biden, the 47th Vice President of the United States, was the special guest, live, TUESDAY, FEBRUARY 25 (11:00 a.m.-12:00 noon, ET). The Vice President discussed the Affordable Care Act and the importance of signing up for health insurance through the marketplace before the March 31 deadline. Vice President Biden sat down with The View hosts Barbara Walters, Whoopi Goldberg, Sherri Shepherd and Jenny McCarthy as part of the shows continuing Red, White & View campaign, which is committed to political guests and discussions. ‘The View’ airs Monday-Friday (11:00 am-12:00 pm, ET) on the ABC Television Network. (Photo by Lou Rocco/ABC via Getty Images) SHERRI SHEPHERD, BARBARA WALTERS, VICE PRESIDENT JOE BIDEN, WHOOPI GOLDBERG, JENNY MCCARTHY

US Vice President Joe Biden gives two thumbs-up prior to US President Barack Obama delivering the State of the Union address before a joint session of Congress on January 28, 2014 at the US Capitol in Washington. AFP PHOTO/Saul LOEB (Photo credit should read SAUL LOEB/AFP/Getty Images)

CAMBRIDGE, MA – MAY 24: Former Vice President Joseph Biden speaks at the Harvard College Class of 2017 Class Day Exercises at Harvard University on May 24, 2017 in Cambridge, Massachusetts. Biden implored graduating students to become involved and paraphrased Plato by saying ‘The penalty you pay for not being involved is that you are governed by those worse than you.’ (Photo by Paul Marotta/Getty Images)

CAMBRIDGE, MA – MAY 24: Former Vice President Joe Biden jokes, ‘Let’s break the internet’ as he puts on a pair of shades during Class Day Exercises at Harvard University in Cambridge, Mass., on May 24, 2017. (Photo by Jessica Rinaldi/The Boston Globe via Getty Images)

Former U.S. Vice President Joe Biden, left, and Michael Milken, chairman of the Milken Institute, arrive on stage at the Milken Institute Global Conference in Beverly Hills, California, U.S., on Wednesday, May 3, 2017. The conference is a unique setting that convenes individuals with the capital, power and influence to move the world forward meet face-to-face with those whose expertise and creativity are reinventing industry, philanthropy and media. Photographer: David Paul Morris/Bloomberg via Getty Images

WASHINGTON, DC -ï¿½ APRIL 26: Former Vice President, Joe Biden and Mark Ein are seen at the game between the Washington Wizards and the Atlanta Hawks in Game Five of the Eastern Conference Quarterfinals of the 2017 NBA Playoffs on April 26, 2017 at Verizon Center in Washington, DC. NOTE TO USER: User expressly acknowledges and agrees that, by downloading and or using this Photograph, user is consenting to the terms and conditions of the Getty Images License Agreement. Mandatory Copyright Notice: Copyright 2017 NBAE (Photo by Scott Cunningham/NBAE via Getty Images)

Joe Biden, former Vice President of the US tours the Museum of the American Revolution, on its openings day, in Philadelphia, PA, on April 19, 2017. (Photo by Bastiaan Slabbers/NurPhoto via Getty Images)

WASHINGTON, DC – JANUARY 12: (AFP OUT) U.S. President Barack Obama (R) presents the Medal of Freedom to Vice-President Joe Biden during an event in the State Dinning room of the White House, January 12, 2017 in Washington, DC. (Photo by Olivier Douliery-Pool/Getty Images)

Biden is currently leading the crowded field of Democratic presidential candidates, so he makes a natural target for the Trump campaign. However, just last month, top members of Trump’s campaign team insisted they wouldn’t be focusing on any individual Democrats and instead would treat them as “one homogenous group” to best capitalize on potential infighting during the primary.

Tim Murtaugh, the Trump campaign communications director, pushed back on the idea they were focused on Biden, pointing to the rapid response emails the campaign sent out during the Wednesday debate that did not feature Biden. Overall, Murtaugh predicted the debates would benefit Trump because they showcased the Democrats’ “crazy policy proposals.”

“At this moment there’s no way to know who President Trump’s opponent will be. Our mission for the Democrat debates was to promote and defend the president’s record, fact check the candidates in real time, and expose the truth about the candidates’ own records,” Murtaugh said. “Over the two days, we feel like we spread the love around pretty well.”

The Trump campaign sent out less than half as many rapid response emails during the debate that did not include Biden.

Trump was in Japan on Thursday for the annual G-20 summit and had meetings with other world leaders while the Democrats were on stage debating. He still managed to fire off one tweet critiquing the Democratic field for supporting health care programs for undocumented immigrants.

The president’s son Donald Trump Jr. was far more active on Twitter as the debate unfolded — and he clearly had his eye on Biden. Don Jr. tweeted and retweeted 29 times during the debate, and 16 of those posts were solely about Biden.

As the debate drew to a close, Trump’s allies seized on the idea that Biden had performed badly, particularly during a fiery exchange where Sen. Kamala Harris questioned his record on race.

Donald Trump Jr. shared footage of the Hindenburg blimp going down in flames.