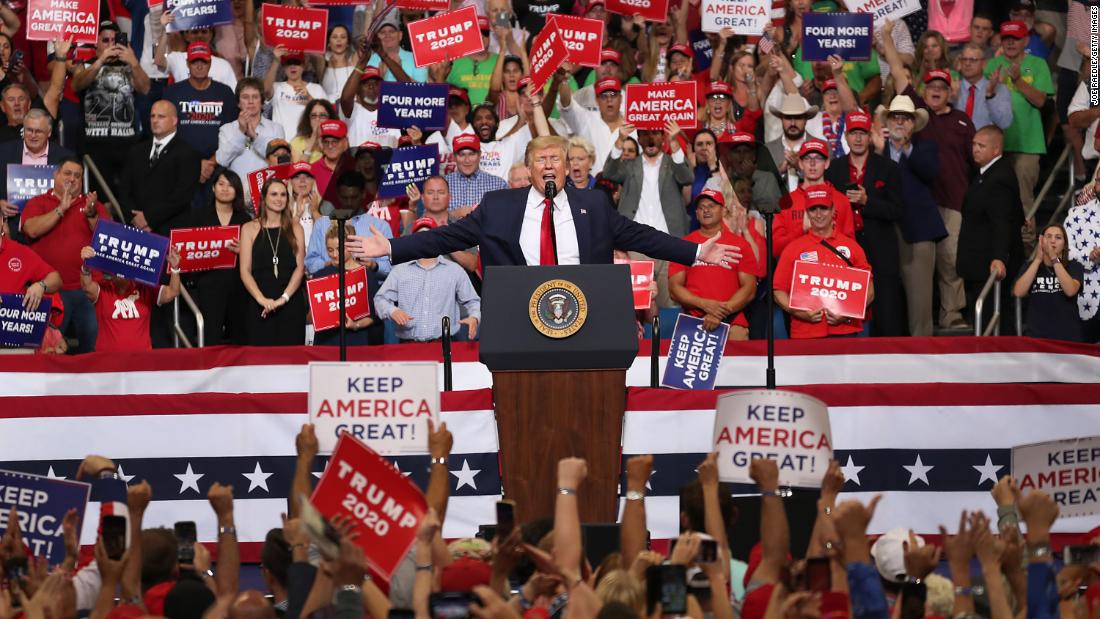 Washington (CNN)President Donald Trump said in an interview aired Sunday that he’s not prepared to lose the 2020 presidential election.

“It would be much better if I said, ‘Yeah.’ It would be much easier for me to say, ‘Oh, yes.’ No, I’m probably not too prepared to lose. I don’t like losing. I haven’t lost very much in my life,” Trump told NBC’s “Meet the Press.”

Trump also subsequently reasserted that he doesn’t “believe” in the validity of “a lot” of votes cast which show he lost the popular vote in 2016 to Hillary Clinton.

“I’ll say something that, again, is controversial. There were a lot of votes cast that I don’t believe,” Trump said.

Outwardly, the President seems to be trudging forward with the idea that he’s an unstoppable candidate — tweeting out a video on Friday showing fictitious Trump campaign signs (e.g. “Trump 2040”) for every election until just about the end of time.

But within the Trump campaign, polling numbers suggest some concern over his viability in some key states.

CNN and other outlets first reported the numbers — which showed Trump trailing former Vice President Joe Biden in states like Michigan and Wisconsin — weeks earlier, but a purge of the polling team was proposed after Trump grew angry about coverage of them.

On “Meet the Press,” the President also spoke about the upcoming election, confirming that Vice President Mike Pence would be his running mate for the 2020 election.

He also said he “may” address election interference with Russian President Vladimir Putin at the upcoming G20 summit.

“Are you going to tell him not to do it?” “Meet the Press” host Chuck Todd asked.

The President said he believes House Speaker Nancy Pelosi is not giving in to pressure from within her caucus to initiate impeachment proceedings because she fears doing so would benefit him politically.

“I think she feels that I will win much easier,” Trump said. “I mean, I’ve been told that by many people.”

Despite arguing impeachment would boost his reelection prospects, the President said he does not like the specter of impeachment hanging over him.

“I’m not sure that I like having it. Look, I did nothing wrong,” Trump said before calling impeachment “a very unfair thing.”

All rights and copyright belong to the author:
Source – https://edition.cnn.com/2019/06/23/politics/donald-trump-2020-election-not-prepared-loss/index.html?utm_source=feedburner&utm_medium=feed&utm_campaign=Feed%3A+rss%2Fcnn_latest+%28RSS%3A+CNN+-+Most+Recent%29