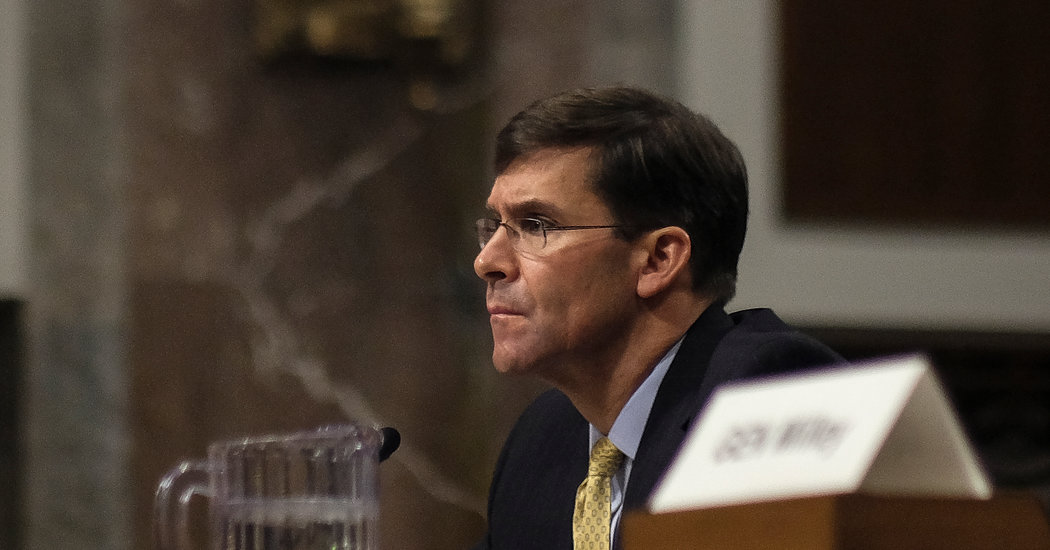 WASHINGTON — President Trump plans to nominate Mark T. Esper, the secretary of the Army and former West Point classmate of Secretary of State Mike Pompeo, to be the next defense secretary, administration officials said on Friday.

They said that Mr. Trump would send the nomination to lawmakers on Capitol Hill in the next few days. If confirmed, Mr. Esper, an Army infantryman who fought in the gulf war before becoming a lobbyist for Raytheon, would succeed Jim Mattis, who resigned in December during a dispute over pulling American troops out of Syria.

Mr. Esper is set to become acting defense secretary on Sunday, following the abrupt resignation of Patrick M. Shanahan, who also was nominated by Mr. Trump to the top Pentagon job. Mr. Shanahan withdrew on Tuesday amid news reports about his 2011 divorce.

The president also plans to nominate Ryan McCarthy, the under secretary of the Army and a former Army ranger, to succeed Mr. Esper, the officials said.

The nominations come as Mr. Esper and the Pentagon are already in the throes of an international crisis over Iran’s downing of an unmanned American drone Thursday morning. On Thursday night, Mr. Trump called of planned airstrikes on Iranian radar and missile sites; the president tweeted on Friday that he called off the strikes because of chances of casualties.

Mr. Esper, along with Mr. Shanahan, was at the White House on Thursday for meetings with Mr. Trump over how to respond. Iran asserts that the American drone was in Iranian airspace, a charge that the United States Central Command denies.

An American strike on Iran likely would be viewed as an act of war, at the very least by Iran and possibly by the international community, as well, military experts said.

When announcing on Tuesday that Mr. Esper would be acting defense secretary, Mr. Trump called him “outstanding,” and “a highly respected gentleman with a great career — West Point, Harvard, a tremendous talent.”

All rights and copyright belong to the author:
Source – https://www.nytimes.com/2019/06/21/us/politics/mark-esper-defense-secretary-nomination.html?emc=rss&partner=rss