(CNN)Vivianne Miedema became the all-time top scorer for the Netherlands women’s team as the reigning European champion progressed to the last 16 of the Women’s World Cup.

The 22-year-old scored two goals as the Netherlands beat Cameroon 3-1, to write her name in the record books.
The Arsenal forward now has 60 goals for her national side, moving her one ahead of the retired Manon Melis.
Miedema was the top scorer in the Women’s Super League (WSL) last season — netting 22 times for the Gunners — and has seamlessly transferred that form to the World Cup.
She opened the scoring for her side with a superb bullet header and doubled her tally in the final five minutes, lashing a world-class shot into the corner of the net.
“It is something special, something I’m only going to live once and it’s a special experience for me,” she said after the match.
“It’s a World Cup — you score a goal, so I think you can cheer and be a little crazy about it,” she added.
“It’s a special moment and I made a deal with my brother to make a roll on the pitch. Maybe that won’t happen again next time. No more gymnastics!”
Scoring records have been tumbling at this year’s World Cup, with USWNT already breaking the record for the biggest winning margin after it thrashed Thailand 13-0. 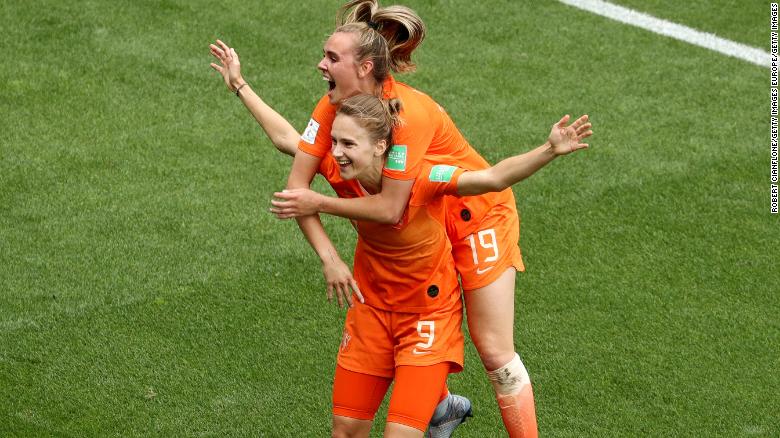 Vivianne Miedema became her country’s all-time top women’s scorer after scoring her side’s third goal.
READ: Italy ends nearly 30-year drought at World Cup
READ: Scotland performance against Japan at World Cup leaves Hope Solo unimpressed
Despite being underdogs in Saturday’s group tie, Cameroon made a real game of it and equalized just 154 seconds after Miedema had given the Dutch the lead.
Gabrielle Onguene timed her run to perfection and capitalized on some sloppy play as Dutch goalkeeper Sari van Veenendaal misjudged the bounce of the ball.
However, the gulf in class became too much in the second half as Dominique Bloodworth, formerly of Arsenal, put the Netherlands back in control before Miedema further extended the Dutch lead.
The win confirmed Netherlands’ place in the knockout stages of the tournament in France as Cameroon recorded its second loss of the group stage.

The Netherlands has almost been the second home team of this year’s World Cup, with a huge number of Dutch fans traveling to watch their side play.
Thousands descended onto Le Havre to watch their side beat New Zealand in the opening game and the support was once again raucous on Saturday.
“Valenciennes is very close to the Netherlands, so we were disadvantaged in this respect,” said Cameroon coach Alain Djeumfa, referencing the atmosphere created by the Dutch support.
“We weren’t able to play an hour away from Holland and it not affect our team on a psychological level.”

Canada also secured its place in the last 16, beating New Zealand 2-0 in its second group game of the tournament.
Despite a great atmosphere in the Stade de Alpes, Grenoble, neither team could make the breakthrough in what was still an entertaining first half.
A dominant Canada — ranked the fifth best team in the world — had the best of the chances.
Christine Sinclair, needing four more goals to become the world’s top international scorer, came closest after her looping header hit the crossbar. 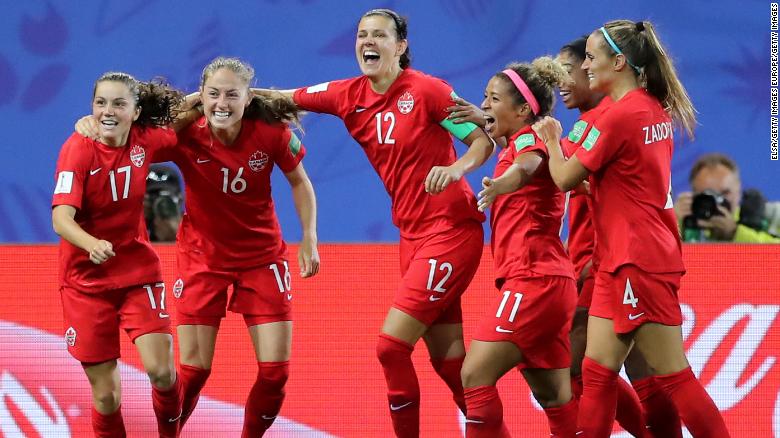 Jessie Fleming celebrates with her Canadian teammates after scoring her team’s first goal.
READ: Brazil striker makes Women’s World Cup history in win over Jamaica
READ: Hope Solo thinks the US went ‘a little overboard’ in their celebrations
Fourteen places might separate the two sides in the FIFA World Rankings but New Zealand defended stoically against waves of Canadian attack which continued after the break.
Finally, though, the pressure took its toll and Jessie Fleming broke the deadlock. The 21-year-old finished off a sweeping move after Nichelle Prince had broken free on the left wing.
Prince herself doubled Canada’s lead in the closing stages, turning in the rebound after Sinclair had once again hit the post with a header.
Canada, already through to the knockout stages of the tournament, faces Netherlands in its final group game while New Zealand faces Cameroon.
All rights and copyright belong to the author:
Source – https://edition.cnn.com/2019/06/15/football/vivianne-miedema-netherlands-cameroon-womens-world-cup-spt-intl/index.html