What next for Lionel Messi and Argentina after yet more international failure? 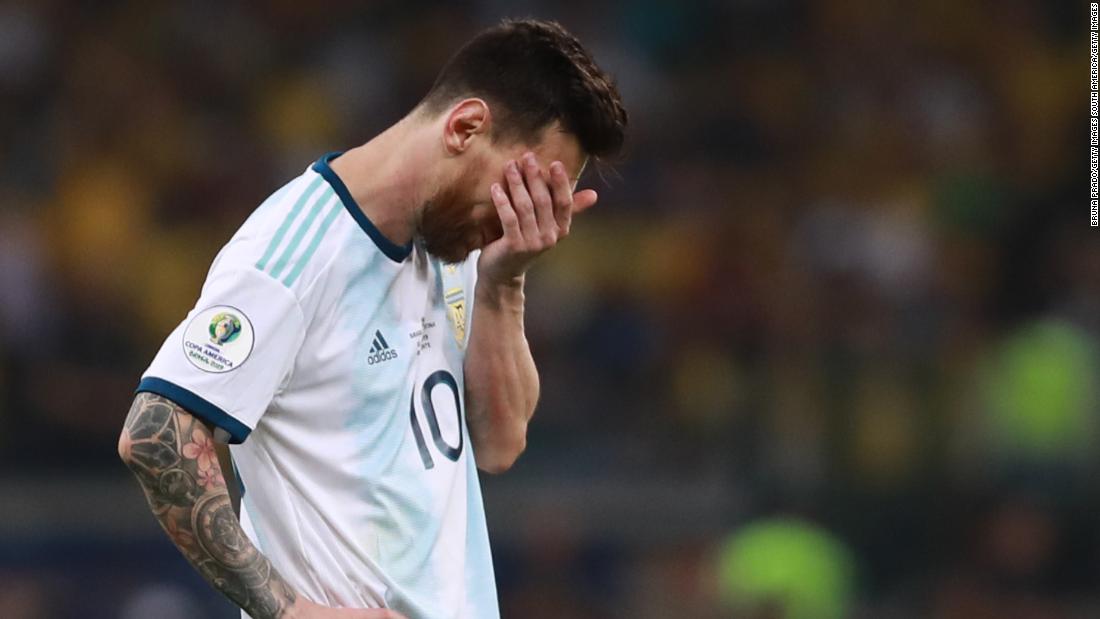 Tuesday’s 2-0 defeat to Brazil in the 2019 Copa America semifinal is the latest in an ever growing list of heartbreaks with the national team that could leave arguably one of the greatest players of all time without a trophy for his country.

The latest disappointment wasn’t enough to force Messi into international retirement — as he did after defeat to Chile in the 2016 final — but, uncharacteristically, he didn’t hold back in his criticism of the referee.

“They were not better than us,” Messi told reporters after the game in Belo Horizonte. “They found the net early and the second goal came from a penalty they didn’t award,” added the 32-year-old Barcelona star, referring to a challenge on Sergio Aguero in the prelude to Roberto Firmino’s strike that made it 2-0.

“The officiating was crazy. There were clear penalties, on Nicolas Otamendi, on Sergio Agüero.

“He [the referee] was on their side. In every divided ball or dispute, he tilted the pitch their way. It’s not an excuse but the truth is that. In this Copa they kept on blowing for stupid things, for handballs, penalties.

“But today, they didn’t even go to VAR when there were clear plays that should have been looked at.”

It may sound like sour grapes but on closer examination, perhaps Messi has a point. If fans thought the use of VAR at the Men’s and Women’s World Cup was perplexing, this Copa America has taken the confusion to another level.

Though it hasn’t just been the use of VAR that’s been the problem, it’s also the lack of it. On the two occasions Messi mentioned, Argentina had legitimate shouts for a penalty incidents that were not even reviewed.

South American governing body CONMEBOL didn’t respond to CNN Sport’s request for comment on refereeing standards and the use of VAR at the tournament.

But there may still be one more chance for Messi to crown his glittering club career with a trophy for Argentina.

Thanks to CONMEBOL’s scheduling and insistence on aligning the Copa with the European Championships, next year South America’s most prestigious tournament will be played for a fourth time in six years.

Some have joked that South America’s governing body will choose to have a Copa every year until Messi finally wins one.

The 2020 competition will take place in Argentina, too, which is co-hosting the 47th edition along with Colombia.

Opinion is divided in Argentina as to who is to blame for the international team’s malaise. Many blame Messi for not performing to the standards he does week in, week out for Barcelona, while others point the finger at his supporting cast that isn’t quite as star-studded as Barcelona’s.

But, of course, Messi certainly isn’t blameless. For all the accolades and superlatives, the little magician failed to register a single goal or assist from open play in this year’s Copa, scoring only once from the penalty spot against Paraguay.

Another blank in front of goal means Messi has only scored four goals in 20 knockout matches when playing for Argentina.

‘Respected and not criticized’

The Argentina manager’s job, currently held by Lionel Scaloni, is arguably the most poisonous chalice in world football — the dream job that no Argentine wants to take, but can’t turn down.

The national team, which has twice won the World Cup, is now onto its fifth manager in the last six years, each one dismissed with every new failure.

For an international heavyweight — perhaps now former heavyweight — and a team with such a rich history, a 26-year trophy-less run stretching back to 1993 Copa America is deemed unacceptable.

But there is a group of young Argentines making strides, plus some of the current crop, that are exciting both Messi and public. Spearheaded by 21-year-old Lautaro Martinez, Argentina’s best player against Brazil, many are starting to feel more optimistic about the future.

“Something new is on the horizon,” Messi said on Tuesday night. “The truth is I have got on very well with this group of players and if I have to help in some way I will. This is a great group which is growing and if I can join them I will.

“I hope we are respected and not criticized. They should let the team be and let them grow,” Messi added.

Argentina’s participation in this year’s Copa America isn’t completely over. The Albiceleste have a third place playoff on Saturday against the loser of Wednesday’s semifinal between Chile and Peru, with the winner going on to play Brazil in Sunday’s final.

French thieves steal over half a million dollars worth of vintage wines from Michelin restaurant: reports