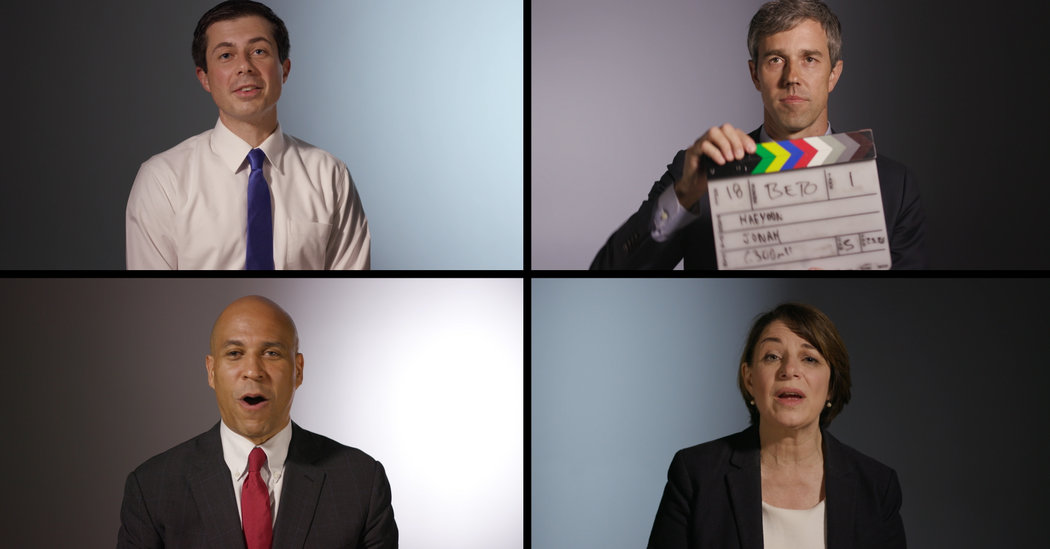 Times Insider explains who we are and what we do, and delivers behind-the-scenes insights into how our journalism comes together.

Senator Elizabeth Warren of Massachusetts was in a bright mood on the morning of March 8. That evening , she would hold a rally in Long Island City, the proposed home of a sprawling Amazon complex, to denounce the tech giant. The antimonopoly policy she announced that day would start her roaring comeback in the 2020 Democratic primary.

She was the first of 21 presidential candidates who agreed, over three months, to be interviewed on camera for a project aimed at introducing the diverse Democratic field to people across the country and around the world. And in the process, we caught some private glimpses of Bernie Sanders, Kamala Harris and others that surprised us.

We were skeptical at first that most of them would participate. Running for president is a hectic ordeal, and any interview involves some risk, especially when it includes a video camera. We did not tell them what the questions would be ahead of time.

But one by one, the candidates agreed: first, Ms. Warren, former Gov. John Hickenlooper of Colorado and former Representative John Delaney of Maryland. Next, Senators Kirsten Gillibrand of New York and Ms. Harris of California, as well as Julián Castro, the former housing secretary. And then, gradually, the rest of them.

The exception was Joseph R. Biden Jr., who was invited to answer the same questions but declined to participate.

We designed the questions to explore differences within the Democratic field, and to draw out the candidates on matters of both policy and personality. We skipped subjects on which Democrats seemed to hold uniform views — whether they believed wealthy people should pay more in taxes, for instance — and focused instead on issues where we could highlight less-obvious distinctions, such as whether they thought it was appropriate for billion-dollar fortunes to exist at all.

[See their responses on billion-dollar fortunes.]

Our goal was to get the candidates to offer clear, direct answers, rather than perform their rehearsed lines on a broad theme. When we asked whether American troops should be withdrawn from Afghanistan, we wanted a yes or no, not a discourse on how the war there is complicated.

[See their responses on troops in Afghanistan.]

In the end, the clearest fault line we found may not have been between liberals and moderates, or insurgents and insiders, but between candidates who were willing to give definitive answers and those who weren’t. On this front, the videos speak for themselves.

At times, candidates flashed revealing glimpses of their interior lives. When we asked, for instance, where they would travel on their first foreign trip as president, it was immediately apparent which Democrats had spent time envisioning that trip in their heads. Former Representative Beto O’Rourke of Texas instantly named Mexico, while Senator Cory Booker of New Jersey replied with unmistakable sincerity, “I’ve given a lot of thought to that, and it’s not something I’m going to be telling The New York Times about right now.”

[See their responses on where they would go on their first international trip as president.]

But some of the most telling — and in some cases, jarring or endearing — moments with the candidates happened off camera, or outside the context of the interview. Mr. Hickenlooper, for instance, showed up at our office flustered because he had lost his wallet, and confessed sheepishly that it had been a long time since he had dealt with certain indignities of being a private citizen. Learning after the interview that his flight home had been canceled, Mr. Hickenlooper took the development in stride; he lingered in the newsroom, bantering with our colleague Stephanie Saul about Teddy Roosevelt’s relationship with the muckraking reporters of his day.

Ms. Harris arrived at the newspaper with a complaint and a request. She asked Patrick Healy, our politics editor, if The New York Times could make it easier to read articles offline on the paper’s smartphone app — an important consideration for a West Coast lawmaker who is regularly confined to transcontinental flights with spotty Wi-Fi.

Ms. Harris — who was at her most animated in the interview when discussing her passion for cooking — also asked to meet Sam Sifton, the food editor. Soon, the two were kibitzing about recipes amid a maze of desks and a gathering crowd of onlookers. (Ms. Harris was less excited when Carolyn Ryan, a masthead editor, approached to ask her about a blossoming late-March crisis for Mr. Biden, involving his physical behavior with women.)

Mr. O’Rourke, similarly, was animated befor e his interview : On a sound stage in Austin, Tex., where we met him, Mr. O’Rourke spent more than a few minutes chatting with our photographer, Tony Cenicola, about their erstwhile rock bands. And Mr. Booker tolerated some joshing about his high-profile personal life — he is dating the actress Rosario Dawson — before pleading that the exchange be treated as off the record.

Some candidates were attentive to their self-care routines in the chaos of a campaign. Gov. Steve Bullock of Montana, who visited the office during the tumult of his campaign kickoff, left in haste after his interview — so that he could take a run in the city before hopping on a flight to Iowa.

And a few were plainly reluctant to meet with The Times .

Mr. Sanders, who periodically castigates the news media, resisted scheduling an interview for months, and told a reporter jokingly in mid-May that he would consider participating in the video project to reward the newspaper for its “wonderful treatment” of him.

“Treat me fairly,” Mr. Sanders cautioned, “and I will treat The New York Times fairly.”

Yet Mr. Sanders agreed a few weeks later to meet with us in Cedar Rapids, Iowa, and when he walked into the hotel conference room where our cameras were set up, he was as gracious and well-coiffed as we have ever found him. He even answered a series of personal questions of a kind he usually disdains, telling us with genuine tenderness that nothing relaxes him like spending time with his grandchildren.

[See their responses on how they relax.]

Ms. Warren, who had the dubious distinction of going first, breezed through our initial list of about a dozen questions before telling a reporter that there had not been enough inquiries about the economy. When that reporter cited the question about billionaires, she shot back: “That’s a Kardashian question.”

Ms. Warren proceeded to hold court on the third floor of the newsroom, outlining her views on tech regulation before dozens of reporters, including some from the Metro desk who sought to tempt her into criticizing Andrew Cuomo, New York’s Amazon-admiring governor. (She resisted the bait.)

Ms. Warren later returned for a second session, in Washington, D.C., in May, because we decided after her leadoff interview to add several more questions, growing the list to 18. Among them were queries about handguns and the death penalty — and the regulation of Amazon and Facebook.

[See their responses on handguns and the death penalty.]

All rights and copyright belong to the author:
Source – https://www.nytimes.com/2019/06/22/reader-center/democrat-2020-candidates-video.html?emc=rss&partner=rss