(CNN)Distraught Cameroon players staged a series of extraordinary on-field protests over VAR decisions as England earned a quarterfinal clash with Norway at the Women’s World Cup with a 3-0 win in Valenciennes Sunday.

The protests took the gloss off the England win, its second biggest at the finals stage, with angry manager Phil Neville claiming they had damaged the image of women’s football in front of a big global audience. ‘That was not football,” he said.
Host France joined them in the last eight later Sunday with a 2-1 extra time win over Brazil in Le Havre.
England’s winning advantage may have been comfortable enough, but the match in the Stade du Hainaut exploded in controversy just before halftime as Ellen White slotted home England’s second goal and her fourth of the tournament.
A flag was up for offside but after consulting VAR, which showed White was onside, referee Qin Liang awarded the goal.
It enraged Cameroon’s players, who clustered around her and refused to restart the match for several minutes, persuaded to carry on by coach Alain Djeumfa, himself openly unhappy with the decision. 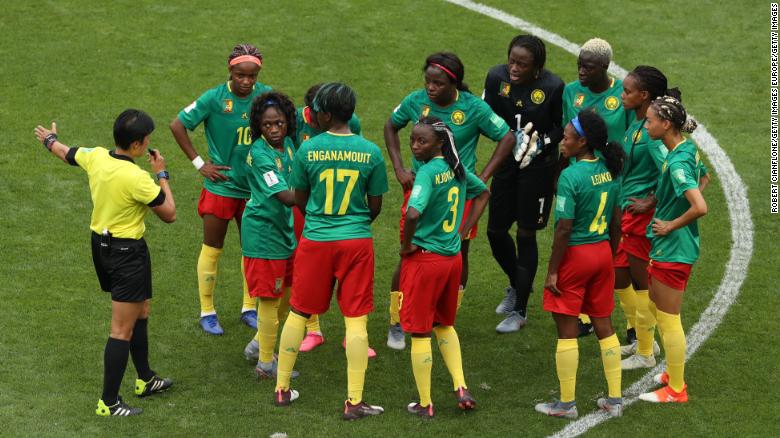 Cameroon players confront referee Qin Liang following England’s second goal for Ellen White which is allowed after a VAR decision.
The protests continued in the tunnel at halftime, with the Cameroon team emerging on to the pitch early for the restart, forming an intense huddle in the middle of the pitch.
Their anger only increased soon after the break when Ajara Nchout took advantage of slack England defending to pull one back with a smart finish from a left-wing cross, only to see it ruled out by VAR for a marginal offside decision.
Goalscorer Nchout was left in floods of tears, comforted by Djeumfa and teammates, with another long delay before the match was restarted.
Clearly unsettled, England had another let-off shortly after as a poor back pass from Alex Greenwood allowed in substitute Alexandra Takounda Engolo, but goalkeeper Karen Bardsley saved her effort.
However, the Lionesses regained composure and from a well-worked corner Toni Duggan picked out Greenwood who fired home on 58 minutes.
England had an unassailable lead with the third, but might have added to its tally, the referee opting not award a penalty after coming to review a possible foul on Fran Kirby in the box by Ysis Sonkeng, thereby avoiding the further wrath of the Cameroon players
There was still time for one more unsavory incident as England captain Steph Houghton was fouled by Alexandra Takounda Engolo, the hefty challenge earning a yellow card, which might have been a red, after a further consultation with VAR.
READ: Kerr penalty woe as Matildas crash out
READ: Germany first team into quarterfinals
Houghton had put England ahead in the 14th minute after Cameroon was punished for a backpass, after Augustine Ejangue intercepted White’s cross and goalkeeper Annette Ngo Ndom picked the ball up.
That award set the scene for the further protests, with Cameroon players clearly unhappy, particularly after Duggan rolled it back to Houghton to finish smartly.

Neville pulled no punches at the final whistle, condemning the Cameroon players for their “unacceptable” behavior and claiming the Chinese referee had made the correct decisions over the award of the goals. 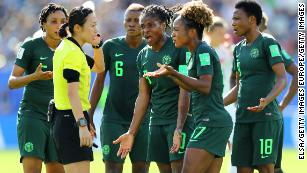 Women’s World Cup: Referees coming under heavy criticism in France
“I can’t stand here and say that is fantastic that we are into the quarterfinals of a World Cup, because this is going out all over the world and young girls are seeing this and can be influenced by it, there’s a bigger picture here,” he told BBC Sport.
“I had no sympathy for Cameroon, the rules are the rules.
“Ellen White was onside, their goal was offside and I think in the end the referee has taken pity on them because we should have had a penalty and it should have been a sending off (for the challenge on Houghton).
“The behavior was wrong because this is the image of women’s football we are talking about.”
All rights and copyright belong to the author:
Source – https://edition.cnn.com/2019/06/23/football/womens-world-cup-england-cameroon-var-protests/index.html
Daily Sports

The X Games has been running since 1995, and it’s not about to stop now. It’s 2021, and the X Games are back. Despite no in-person crowds, some of the biggest snowboard and ski athletes in the world will return to compete on the big stage. 2021 X

The X games aspen 2021 return this Friday, January 29 with 17.5 hours of live content over the three days of competition on ESPN, ABC and ESPN2. Nearly 100 of the worlds top winter athletes will take center stage and will compete in biggest snow sport event of the